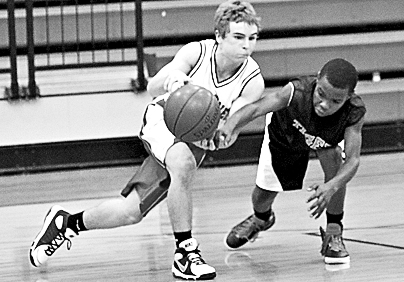 The Junior High Lady Dogs have had a great season this year. After Monday's win against Chester, the team is 9-1 on the season. The score ended 36-18 with Taylor Barker leading the team with 23 points, 11 rebounds, and two steals, followed by Sabryn Costellow with nine points and five rebounds; Bayleigh Thedford with two points and four steals; and Alexis Follmar with two points and five steals. "This was a good win for our girls," said Coach Sewell, "They really played well." The Lady Dogs will play their final game on Monday, February 6 against Apple Springs in Colmesneil, beginning at 5 p.m.

It's been a pretty good season for the Junior High Bulldogs. The team has had four wins and three losses so far, their toughest loss being against West Sabine. "Our best game was when we played Burkeville," explained team members Tristan Rigsby and Dalton Davis, "They were good competition and we won!" The team will also play their final game on February 6. Good luck Bulldogs and Lady Dogs! 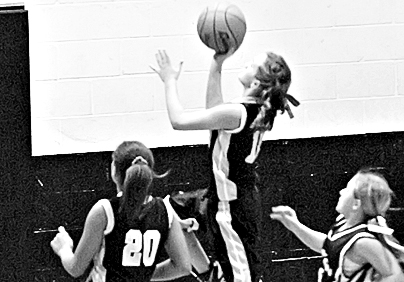 The Lady Eagles picked up two big district wins this past week. Woodville traveled to Newton on Tuesday, January 25 and walked away with the win, 61-38. The JV girls also defeated Newton that evening. On Friday, January 28, Woodville hosted Corrigan-Camden and also defeated them, 67-49.

Eagle scorers for the home game included Destiny Gill and Mia Barlow each had 19 points, Jasmine Spears with nine points, JuLisa Williams with eight points, TeKenah Barlow with five, Sarah Reese with three, Shaniqua Barlow and Morgan Powell with two points each. "These two wins bring our district record to 6-3, tied with San Augustine for second place in district play, "said Coach Troy Carrell. "Our overall record is 16-8. We are really starting to peak at the right time and playing good ball."

Although the Eagles' JV boys played hard in their game against the Newton Eagles on Tuesday, January 25, they walked away with a loss. However, Friday's game against the Corrigan-Camden Bulldogs was a different game with a different result – a win for Woodville. Eagle scorers included Jamal Horn with 22 points while Jason Evans had an additional five points and a big shot to put the game into overtime.

The boys hung on to win the game by a score of 39-36, putting the boys at 11-16 for the season. The Woodville Eagles will travel to Central Heights to play the Blue Devils on Tuesday, January 31 and will then play the Woden Eagles on Friday, February 3. The Woodville-Woden game will be Woodville's last home game.

The Woodville Middle School girls' basketball teams played Newton on Thursday, January 26 where the seventh grade girls' team won 22-8. During the game, Woodville kept the score down, not allowing the visiting team to score until well into the third quarter. At the end of the first quarter, the score was 10-0 and at halftime the score was still in Woodville's favor, 16-0. By the end of the third, it was 16-5 and the game ended with Woodville ahead, 22-8.

The Woodville eighth grade girls also won their game with a game end score of 33-14. The score at the end of the first quarter showed the home team ahead 8-2 and at halftime, the home Eagles were still ahead 18-4. At the end of the third, Woodville was still in the lead, 26-11, and at game's end, the scoreboard showed Woodville's win, 33-14.

Both the varsity girls and boys basketball teams ended the week on a good note after winning all of their scheduled district games. After a few tough losses, both teams got back on their feet and brought home four consecutive wins.

The boy's team faced Chester on Tuesday and got pulled off a 71-18 win. The game began with an unguarded layup by Colyn Walding, a perfect sideline shot by Aaron Ford, and a free throw and rebound by Chaz Shook. The rest was history as the boys hit a large percentage of their shots. After the first quarter, the Pirates had pulled ahead by 24-4. In the second quarter the boys were still on fire as they hit layup after layup and consecutively snagged rebounds. For the game against Chester, Coach Odom had pulled the Junior Varsity team up to play with the Varsity boys and they all proved that they have what it takes to compete in a higher level of game play. Cody Winkle sunk three 3-point shots from the baseline, and Austin Ross finished up the game with a layup that brought the final score to 71-18.

The girls also managed to snag a win at Chester. The game started out with the Pirates ahead five to zero but Chester fought back hard and evened the score at 9-9 with 2 minutes left in the first quarter. Coach Martin called a timeout, and afterwards the girls really started to play like a team and make their shots. At the end of the first quarter the score was 14-9 with the Pirates leading. In the second quarter the team only allowed Chester to score 6 points while the girls scored 11 points, bringing the score at halftime to 24-15.

In the second half the Pirates really stepped up their game play and Kaitlyn Willis started to attack the basket and made 8 points for the Pirates in the third quarter alone. The score at the end of the third quarter was 33-34. Ashley Hollier, Kaitlyn Willis and McKenzie McGallion led the scoring in the fourth quarter with multiple layups, rebounds and assists. A last-second basket by Ashley Hollier won the game with a 48-39 score.

After the wins in Chester, both teams were pumped for the games against High Island. The girls played first and beat High Island with a score of 42-20. The team was led by Kelsey Sheffield with 12 points and 12 rebounds, and Kaitlyn Willis with 10 points and 7 rebounds. The girls also set a season record of lowest number of turnovers in a game with only 3. Although the girls struggled with shooting and only made 28% of shots from the field and 10% of three point shots, they still persevered and fought to claim the win.

The girls only have two district games left and are expected to make it to the play-offs for the first time in years. The coaches and community wish the girls luck as their season continues.

The boys also dominated at the game against High Island and won with a score of 71-28. Leading scorers for the game were Nathan Sheffield with 20 points, 5 rebounds and 4 steals; Cody Winkle with 16 points, 3 rebounds and 3 steals; and Aaron Ford with 15 points, 8 rebounds and 5 steals. The crowd went wild when Heith Zoch and Michael Reyna picked up their very first varsity baskets in the fourth quarter.

Although High Island lost the game, the team and coaches respect their heart and drive. They went into the game with only 5 players and no bench, and were forced to play with only 4 boys during the end of the game.

"I really admire High Island," said Coach Odom. "They continued to play the entire game, even when they were left with only four players. Everyone should learn a lesson from those players about having heart."

The boys and girls play in Goodrich on January 31 and at home against Legget on February 3.

On January 27, the Warren Varsity boys' basketball team played in a crucial game against Anahuac. Throughout the game, the Warriors performed excellently and finished with a solid win against the Panthers.

Anahuac was the first to be put on the scoreboard via a pre-game technical foul against the Warriors; however Warren was quick to turn it around with Jacob Blackshear and Kolton Perfect both making shots for their team. The team then initiated a powerful attack against the Panthers with Bryce Glosson and Jacob Jensen adding to the score. Anahuac threw in a few shots, but was not capable of taking on their opponents, who rounded off the first quarter with an impressive score at 15-4.

The Warriors continued their tour de force with a relentless onslaught against the Panthers. Blackshear led the way, scoring 8 points himself. Jensen and Glosson also accumulated a number of points for the team. Anahuac pushed even harder this quarter and their work paid off as they made a significant approach toward Warren. Despite their labors, the Warriors continued to take this one home with a score at 34-17, with only two quarters remaining.

The Panthers realized that they would have to work harder than ever in order to prove successful, but Warren found fault in their plan with their unwillingness to budge. Just as before, the team worked as a whole and collectively made multiple goals to keep them a comfortable distance away from their opponents. Dresden Chatman and Tyler Conner both added to the end score of 60-32.

The last quarter arrived with the Warriors in a secure lead. However, they worked just as hard to defend their position as they did to get there. Conner supplemented a total of 13 points to the already steady score, which all but guaranteed their victory, which came shortly; the score ended at 75-44.

The Warriors compete against Kountze on February 7, the game will be at home and will commence at 7:30 p.m. Only the varsity will play.

The Lady Warriors will also play against Kountze on February 7. This will be the final game for the team and will honor the senior members. The game will begin at 6 p.m. and will be at home.

Email:This email address is being protected from spambots. You need JavaScript enabled to view it.