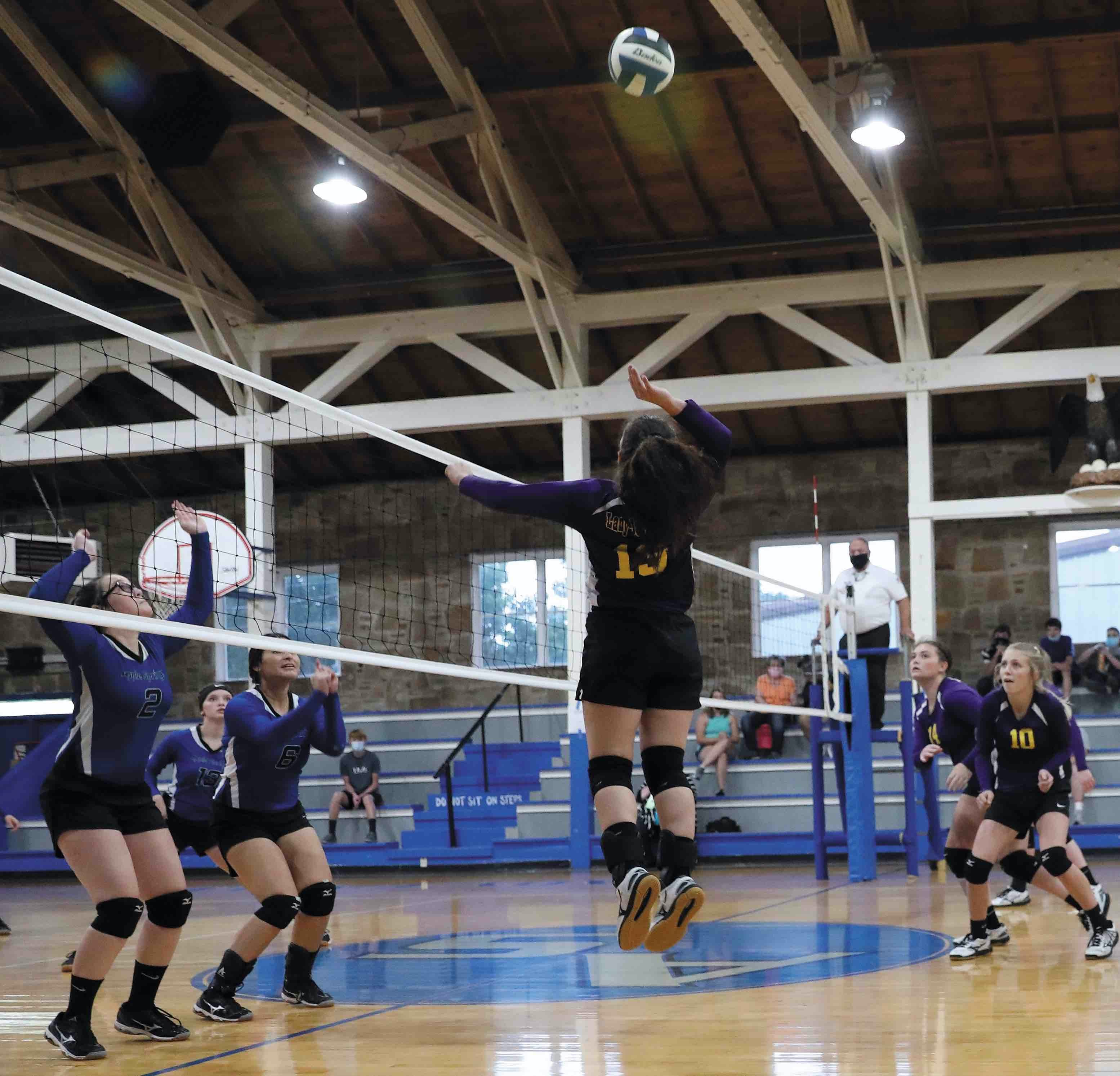 PHOTO COURTESY OF BECKI BYRD Lady Jacket Jasmine Mitchell goes up for a kill last week in a match against Apple Springs. The Lady Jackets swept The Lady Eagles in three sets.

CHESTER – The high school volleyball team was on the road all last week. The team defeated Kountze 4-1 on Tuesday, Sept. 8.

Kinsley Barnes had 8 blocks and 10 kills during the game. On Friday, September 11, the girls defeated Apple Springs in their first district game of the season. The Lady Jackets swept the Lady Eagles in three sets. Jasmine Mitchell led in kills for the game, with a total of 20 kills in all three sets combined.

Yellowjacket Football
The Chester Yellowjacket football team traveled to Houston on Friday, Sept. 11 to face the Texas Christian Tigers. The Yellowjackets got behind early in the game. However, they played a much better second half. In the end, the Jackets lost 24-48.

The Jackets will host the Baytown Christian Bulldogs on Friday, Sept. 25 at 7p.m. 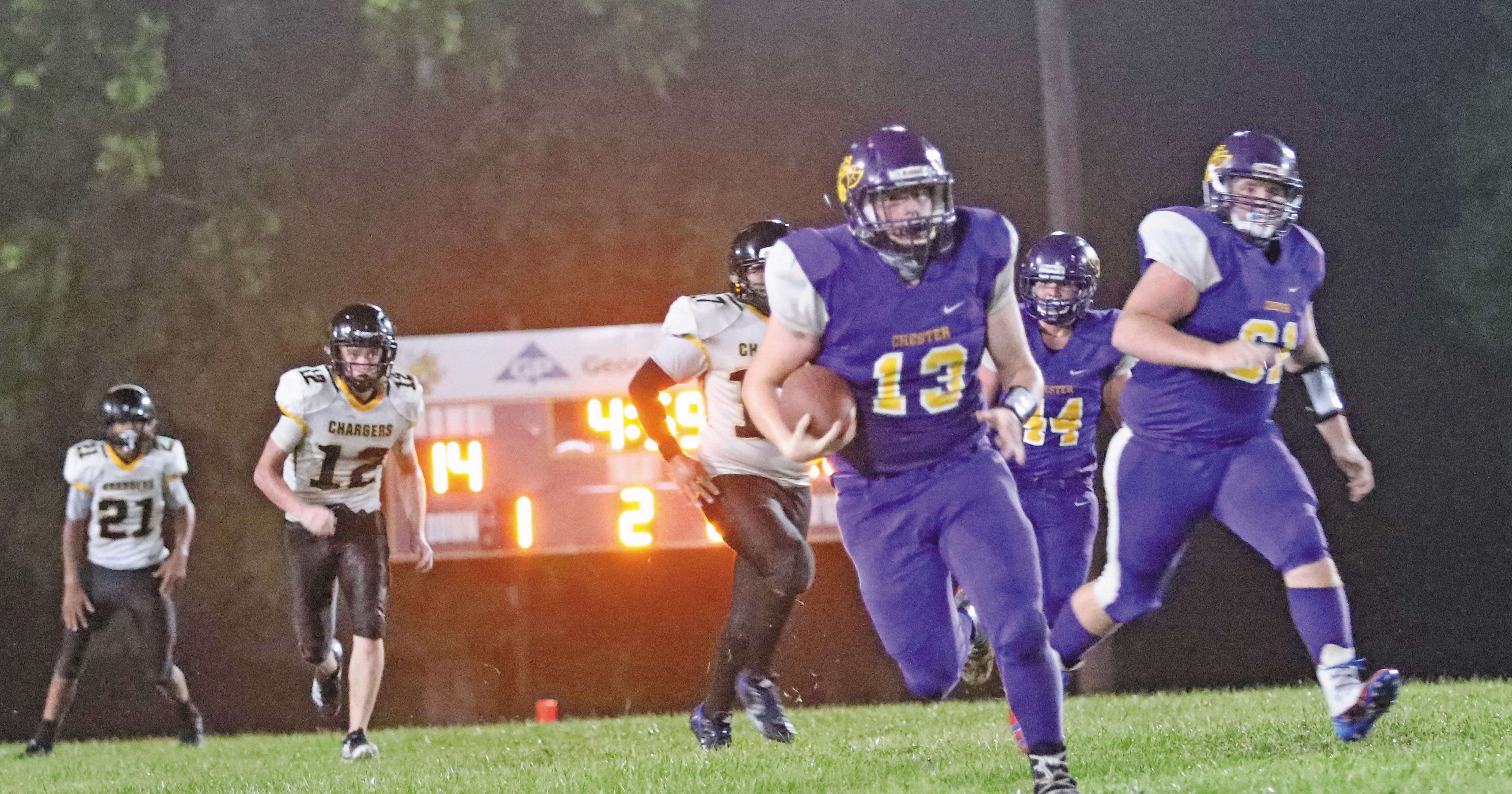 CHESTER – The Chester Yellowjacket football team hosted the Fort Bend Chargers on Friday, Sept. 4 in the first home game of the season.

Coach Raymond Woodard was encouraged with the progress his team has made since they started practice at the beginning of the school year. “We had two players rush for over 100 yards. Carsyn Whitworth finished the game with 140 yards and Kessler Romo had 102 yards,” Woodard said.

Additionally, Romo and Colton Pursley had two touchdown receptions each. Carson Thomson has improved tremendously, and Woodard looks for him to have a big year as quarterback for the Yellowjackets. The entire team played hard until the end of the fourth quarter, and even though the Jackets lost 39-71, the coaches were proud of their effort.

The Jackets will travel to Houston to face the Texas Christian Tigers on Friday, Sept. 18 at 7 p.m.

Junior High Football
The junior high football team took the field on Friday, Sept. 4 against the Fort Bend Chargers. The boys weren’t out on the field long before the weather got rough. After the game was delayed due to lightening, the coaches and officials made the decision to cancel the game.

The junior high school was scheduled to travel to Houston to play against the Texas Christian Tigers next week, just prior to the high school game. However, due to low player turnout for the Tigers, that game has been cancelled.

Lady Jacket Volleyball
The high school volleyball team hosted the West Hardin Oilers on Tuesday, September 1. The Lady Jackets had no trouble with Hardin and defeated the Lady Oilers in three games. Coach Megan Nichols was very pleased with her team and said, “This is the best they have played yet this season.” Jasmine Mitchell led in kills and digs, going into double digits in both. Brianna Kort had four aces. Bailey Fann played a great game and had 2 aces and 4 kills in her first varsity match.

If spectators are planning to attend an away volleyball game, they must obtain tickets from a volleyball player. Each district team is only given a certain number of tickets for away games, depending on the gym size of the opposing team.

The junior high volleyball teams were off again last week due to a power outage in Chester. The Jackets were scheduled to host the Diboll Lady Jacks.
The junior high team will travel to Goodrich on Thursday, Sept. 10 at 4 p.m. The girls will be back on the road as they will head to Livingston on Saturday, Sept. 19 to take on the Lady Lions. Game time is 9 a.m. 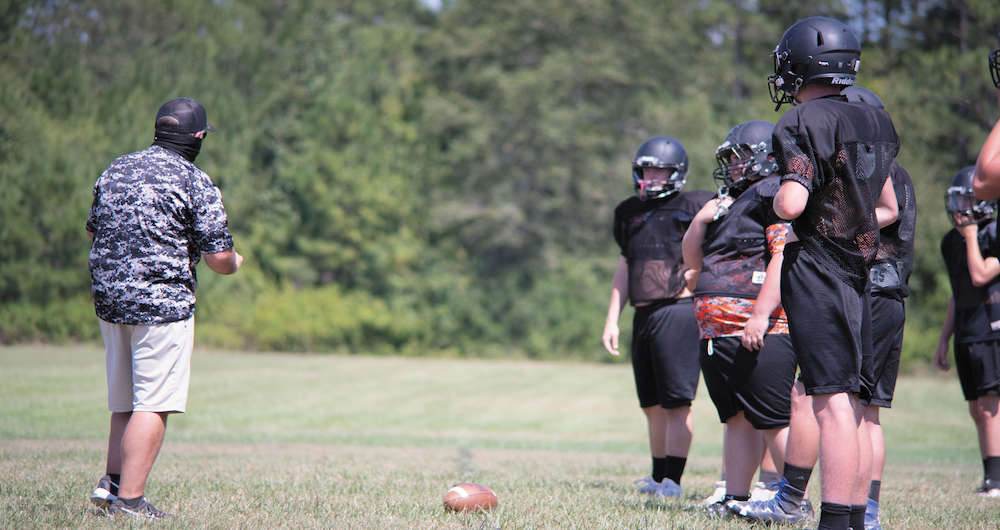 Warren Warriors offensive coordinator Ronnie Ford coaches the team as they prepare for the season. Friday’s game against Huntington is cancelled due to Hurricane Laura, but according to Warren ISD, those who bought tickets will be honored at the next home game on Sept. 11 when the Warriors play West Hardin. For more countywide sports, check out this week's paper. 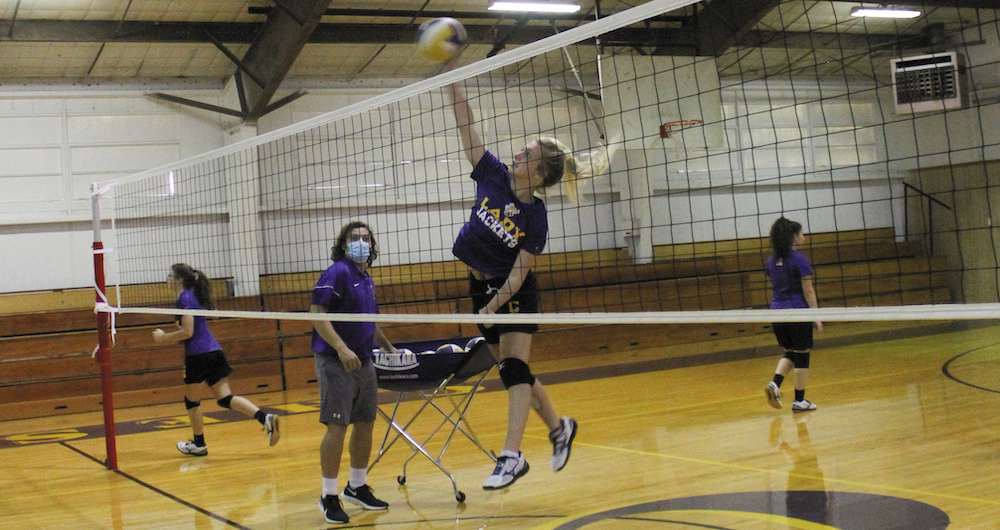 Lady Jacket Volleyball – High school athletes across Texas have waited a long time for athletic competitions to resume.
That time has come for the Chester Lady Jackets, who were victorious in their first game of the season. The Lady Jackets defeated the Sabine Pass Lady Sharks on Tuesday, August 11. The Lady Jackets won 3-2. Jasmine Mitchell led in kills with 15. Trinity Jerkins and Kaylee Tolar each had 8 aces for the night. Coach Megan Nichols was pleased with their first showing, and looks forward to watching her athletes grow and improve during this season.
Chester was scheduled to travel to Hull-Daisetta on Friday, August 21, but the game has been cancelled. The Lady Jackets will travel to San Augustine on Tuesday, August 25 for a game against the Lady Wolves at 4:30p.m.

Looking forward to a great season
Nichols is in her third year as head coach of the team, and Dylan Varnon will officially step in as assistant coach. Nichols is excited for the addition of Varnon. She believes he brings a lot of offensive system knowledge and helps determine what rotations need the most work. She added, “Coach V also brings a lot of enthusiasm and pep to balance out my ‘seriousness’ at times.”
Nichols said the first week of workouts have gone great. The team is fairly young but have been able to pick up on things fast and adjust. Nichols said senior Jasmine Mitchell really stepped up and attended almost every summer workout, and it shows. Kaylee Tolar has also stepped up, and even though she is a sophomore, she has grown from a serving specialist to an all-around player. Olivia Gilzow has been able to take on a new position and has stepped up as a vocal leader. Kat Knox and Kinsley Barnes have been great additions to the team as freshmen.
Nichols said she is fortunate to have a group of athletes this season that are all going to play their role to the best of their ability. Additionally, she has eight girls who have played together previously and that is huge for team chemistry. Nichols also adds that the biggest challenge this season will be adjusting to the new rotation and training a new setter.
UIL guidelines will make things a little difficult this season, with mask wearing on the bench and other stipulations, but Nichols and her team are happy to do whatever needs to be done in order to get to play.