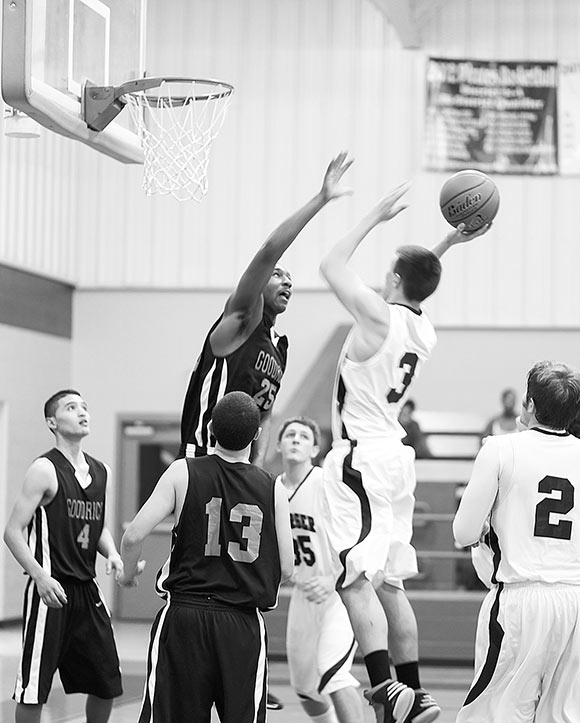 The Spurger Pirates boys basketball team continue to fight for a spot in district, and proved that they have what it takes to be a district play-offs contender when they defeated the Goodrich Hornets after a tough game on Friday, January 25.

After the Lady Pirates claimed a win against the Hornets earlier in the day, the varsity boys knew they would have to come out fighting if they planned to score against Goodrich. The Hornets had size and speed on their side but the Pirates have heart, and definitely gave Goodrich a run for their money.

The game started out with the Pirates hitting a quick basket within the first few seconds of play time. Immediately after that first basket, the Pirates made a mistake and allowed Goodrich to shoot two free throws. The Hornets sunk one of the two shots, and immediately rebounded the missed free-throw and hit a basket, causing the Pirates to fall behind with a score of 2-3. For the next two minutes of the first quarter, the Pirates really played some impressive defense and were able to hold off the Hornets from making any baskets.

The Pirates were able to regroup again at half time and devise a new strategy for gaining some points against Goodrich. Chazz Shook came out of the gate making shots at the beginning of the second quarter and brought the score up to 15-13 with the Pirates in the lead. Austin Ross, Nathan Sheffield, Luke McLeod, Colyn Walding and Aaron Ford were all able to make some great shots in the second half, sending the Pirates ahead by 34-19 at halftime.

After halftime, the Pirates really found their stride and began

hitting a majority of the shots that they attempted. In the beginning of the third quarter, Cody Winkle had all of the fans on their feet after he sunk a perfect three point shot, bringing the score to 45-23 with the Pirates holding the lead. The Pirates continued to score, and were able to hold off the Hornets, only allowing them to make three baskets during the entire third quarter. An awesome layup by Caleb LeBouf with only 12 seconds left in the third quarter brought the score up to 59-32 and had the entire Spurger crowd cheering on the Pirates.

The fourth and final quarter of the game was basically a repeat of the second and third quarters. The boys sank a majority of their shots, while Goodrich struggled to break through the Pirates defense. Colyn Walding, Chazz Shook, Aaron Ford, Nathan Sheffield, and Caleb LeBouf all sank several baskets in the fourth quarter and with only two minutes of game play left, the Pirates held an impressive 74-40 lead.

The Hornets made several last ditch efforts to close the gap in score, but were only able to sink two baskets before the end of game. The game ended with the Spurger Pirates winning 78-44.

The Pirates varsity boys team will play against High Island on