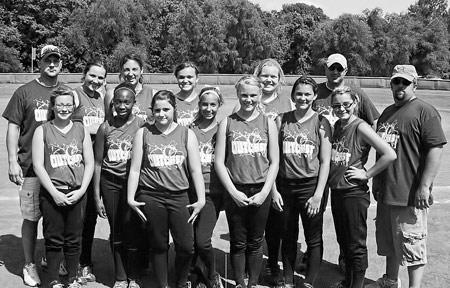 The girls 14 and under division recently competed as the Tyler County All Stars Team, Outcast. This team consists of some of the best softball players between the ages of 12 and 14 throughout Tyler County. The team consisted of players Karlea Belsey, Haleigh Belt, Jaci Davis, Krista Harris, Destiney Kirkindoll, Erin Lusk, Katie McCluskey, McKenzie Rogers, Samantha Shutter, Bayleigh Thedford, and Keyara Williams. Rogers pitched for the majority of the tournament, while Davis assumed the role of catching. The team is coached by Coaches Bobby Harris, Lance Seamons, and Chris Rogers. Outcast participated in a tournament in Nacogdoches on May 26 and 27. The team lost their first game against Intensity of Hudson, but shot back in a 6-5 match against the Diboll All-Stars. They struck again with another win against No Fear of Corrigan, in a game with a final score of 11-7. Despite the teams disappointing first game, the team kept performing well as they beat the Huntington All-Stars in a landslide with the score at 12-4. It was the next game which eliminated them from the tournament. Their final game was against the Lady Rams from Joaquin. The Lady Rams got the best of Outcast as they stole the game in a 2-6 match. Outcast finished the tournament in the third place position.