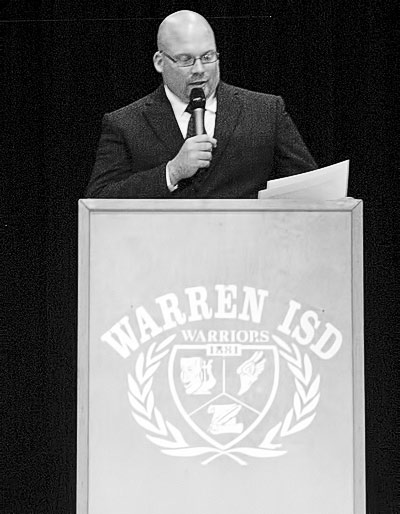 Warren High School hosted an Athletic Banquet to acknowledge the skill and determination of the participating athletes. The coaches recognized all of the sports and the seniors that participated in them, as well as those who demonstrated excellence in their sport.

Cross Country was the next presentation, which featured no seniors. Mercedes Sanchez received special recognition for being the sole regional-qualifying member of Warren's cross country team. Interest then shifted to girls' basketball. The seniors of the Lady Warriors basketball team were Meagan McCluskey, Haley Roach, Jordan Spivey, and Shelby Ford. The players chosen for All-District were Brenna Johnson, Kaelin Miller, Jordan Spivey, Meagan McCluskey, and Mollie Applewhite. Boy's basketball also had a successful year with three seniors, Dresden Chatman, Jacob Jensen, and Jacob Blackshear, who was an Academic All-State Nominee due to his prowess in basketball. The All-District selections were Blackshear, Bryce Glosson, Kolton Perfect, Tyler Conner, and Jacob Jensen.

No seniors participated in Power Lifting; however, recognition went to the regional qualifying Gaylon Stoobing, for his determination in weight lifting. Girls' and boys' tennis featured 4 seniors, including Nathan Aulbaugh, Jacob Blackshear, Kristyn Miller, and Vance Lambright. Aulbaugh, Blackshear, and Miller all advanced to regionals, where Aulbaugh and Blackshear placed third in boys' doubles. Those two were also the only two seniors to participate in golf, in which Blackshear placed eighth at regionals. Brenna Johnson also participated in golf and placed thirteenth out of eighty-nine golfers in regional competition.