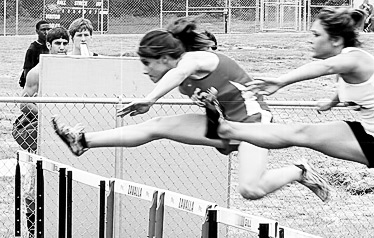 The Colmesneil track team has advanced 12 people to the regional track meet in San Antonio on April 27. For the boys, the relay team of Bryce Rains, Ryan Tyler, Zach Costellow, and Cody Walsh will be running the 400-meter relay and the 800-meter relay. Also for the boys, Colton Ackley will compete in the shot put and discus, and Matt Bailey will compete in the 300-meter hurdles. For the girls, the relay team of Jaymee Broussard, Kara Standley, Nikki Noble, and Treasure Jackson advanced in the 400-meter relay. Also, Ali Harvey advanced in the shot put and discus, Nikki Noble advanced in the 100-meter dash, and Jaymee Broussard advanced in the pole vault, long jump, and 110-meter hurdles.

The Lady Dogs softball team traveled to Chester last Tuesday, looking to extend their 7-1 district record and maintain sole possession of first place. Kara Standley got the Lady Dogs started with her RBI triple in the first inning, allowing them to jump out to an early lead against Chester. In the second inning, Megan Allen's two-run homerun to left field gave the Lady Dogs a comfortable 4-1 lead. The third inning is when things started getting out of hand. With two runners on base, Olivia Spradlin hit an RBI single. The next batter, Ali Harvey, then hit a three-run homerun, giving the Lady Dogs a 9-1 lead. In the fourth inning, sloppy play by the Lady Jackets allowed Natalie Moffet, Kimberly Knighten, Dakota Pentecost, and Olivia Spradlin all to steal home. Pitcher Kara Standley finished the game with eight strikeouts, allowing one walk, and gave up only one run. The final score was 17-1, giving the Lady Dogs an 8-1 district record as they head into a pivotal part of their season.

The Bulldogs traveled to Chireno last Friday to play the Owls in a double-header. In the first game, senior Cullen Barker hit a two-run homerun, paving the way for an easy 13-0 win for the Bulldogs. Pitcher Bryce Rains was almost perfect, striking out eight batters and giving up zero runs. In the second game, senior Daniel Bruton's only at-bat resulted in a solo homerun. Haiden Hughes also had a nice day swinging the bat, going three-for-three with two runs batted in. Sophomore Cole Lowery got his first start of the season pitching, and he didn't disappoint. His 14-strikeout, one-hit performance led the Bulldogs to a 12-1 victory over the Owls. The Bulldogs are now 9-1, and are in the driver's seat in district standings with just three games to go. The Bulldogs' next game will be in Burkeville on April 20 at 6 p.m.