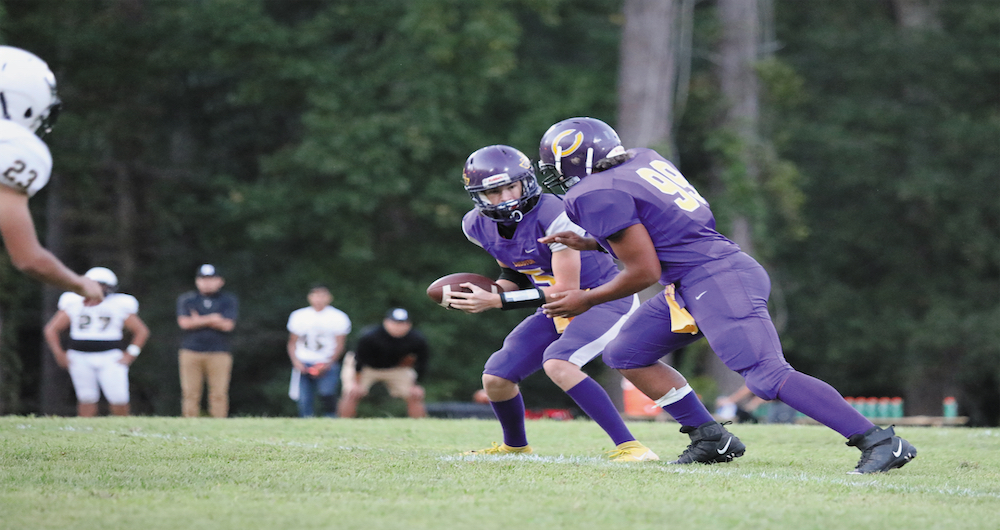 CHESTER – The Chester Yellowjacket football team destroyed the Mount Carmel Bulldogs in front of the homecoming crowd last Friday night at Aubry Bradley Stadium. The Jackets outscored the Bulldogs 45-0, in a game that ended in the third quarter because of the mercy rule.

Coach Raymond Woodard said, “We came out with an intensity that I like.” He was impressed with quarterback Carson Thomson, who did an outstanding job running the offense for the Jackets. Woodard said his team improved on the defensive side of the ball, and that is something they have been working on in practice. Freshman Keighen Green scored twice on offense and then broke their back with a 47-yard fumble return for a touchdown. The entire team executed and made it happen Friday night.

Just prior to kickoff, Jasmine Mitchell was crowned the 2020 Homecoming Queen. Mitchell was escorted by Zaron Missey.
The Jackets will have this week off due to the Tyler County Fair, but will be back in action on Friday, Oct. 16 as they travel to Buckholts to face off against the Badgers in a 7 p.m. game.

Junior High Football –The junior high Jackets did not have a game last week and will have a bye due to the Tyler County Fair this week. The Jackets will travel to Buckholts on Friday, Oct. 16 at 5 p.m. to battle it out against the Badgers. The junior high will play prior to the high school game.

Lady Jacket Volleyball – The high school volleyball team played only one game this week, as their game against Latexo was cancelled. The Lady Jackets shut out the Goodrich Lady Hornets in front of a home crowd on Tuesday, Sept. 29. The Lady Jackets won in three straight sets, 25-5, 25-6, 25-14. Brianna Kort had 13 aces, Jasmine Mitchell had 10 aces, and Linzie Romo had 2 aces. Mitchell led with 6 kills for the night and Audrey Gilzow had 5 kills.
On Friday, Oct. 9, the Lady Jackets will host the Apple Springs Lady Eagles in a 4:30 p.m. game. On Tuesday, Oct. 13, the Lady Jackets will play another home game against the Lovelady Lady Lions. Game time is 4:30 p.m.
The junior high Lady Jackets were off this past week, but will play against the Kennard Lady Tigers at home on Monday, Oct. 12 at 4 p.m.

The high school cross-country teams will compete in the Lufkin Coca-Cola Invitational on Wednesday, Oct. 7.