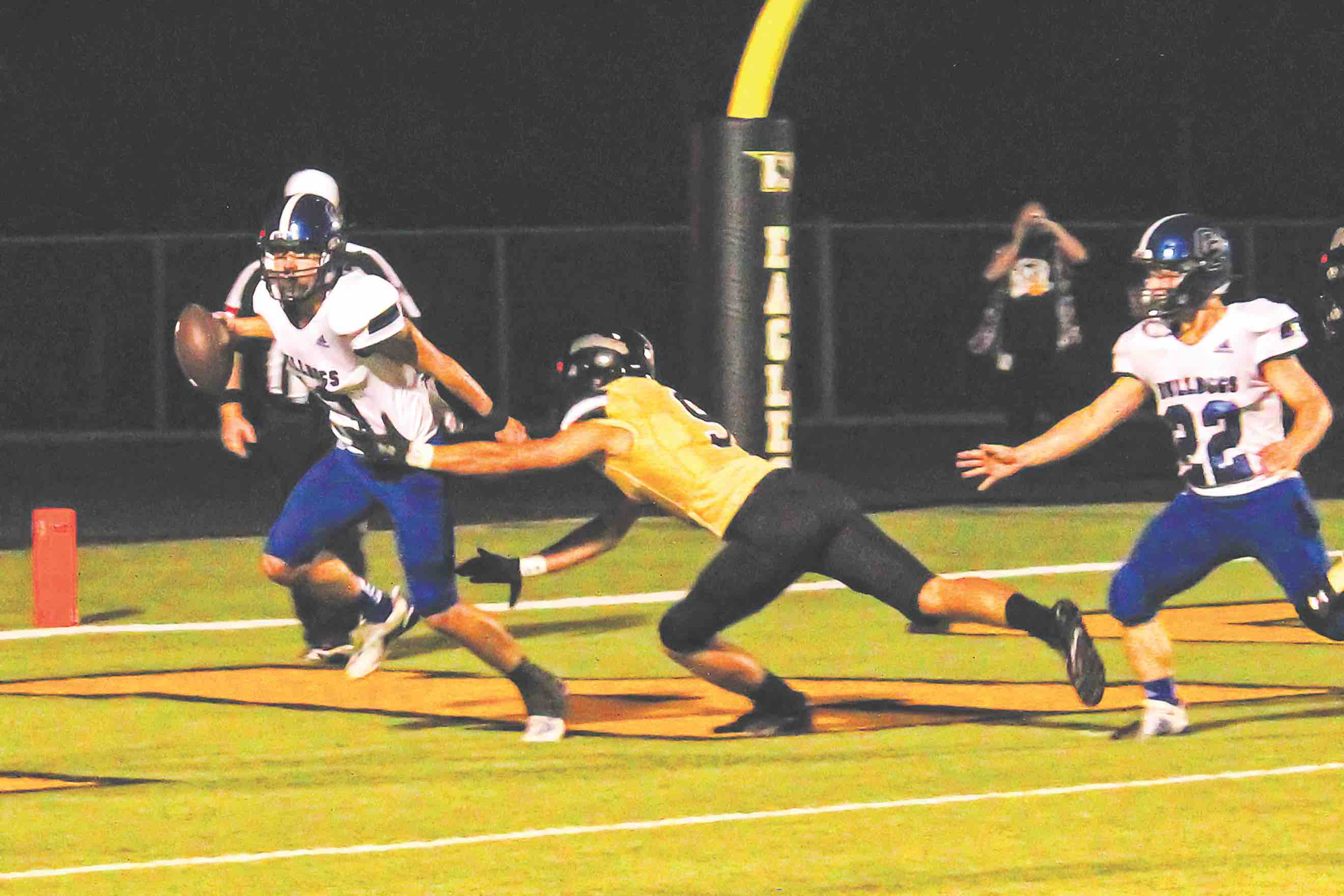 WOODVILLE – The Woodville Eagles took down the Corrigan-Camden Bulldogs 48-7 on the Eagles’ home field on Friday.
A constant string of turnovers, penalties and bad snaps hit a season high on Friday and prevented Corrigan from gaining any real momentum over the Eagles.

Although the Bulldog defense held strong for most of the first half and made crucial stops, it was eventually worn down by Woodville later in the game.

Corrigan was forced to punt on the opening drive, while the Eagles quickly reached the red zone, scoring on a touchdown pass from Woodville quarterback Jack Fowler to running back Jatavian Taylor.

The first turnover occurred on Corrigan’s second possession, with a fumble recovered by Eagle defensive end Pop Prejean and taken 88 yards to the end zone for a touchdown. The extra kick was blocked, which made it 13-0 midway through the first quarter.

During the second quarter, Woodville’s offense struck again with Eagle safety Trotter Moses breaking a key tackle on a short reception for a touchdown.

The following two-point conversion was successful to extend the lead to 21-0 at halftime.

The Bulldogs came out swinging to start the third quarter by recovering an onside kick, then capitalizing with their only scoring drive of the game.

The touchdown play involved some trickery, as Bulldog sophomore running back JaVarion Williams threw a 41-yard bomb to sophomore back Anthony Harrell. The extra kick was good, putting seven points on the board for Corrigan.

However, the Bulldog offense lost momentum on its next possession, where a bad snap resulted in Williams tackled on the wrong end of the field for a safety.

The Eagle offense capitalized with receiver Jacorey Hyder scoring on a 33-yard touchdown catch, making it 29-7 midway through the third quarter.

Corrigan then suffered a quick three-and-out, leading to the Eagle offense putting together a long scoring drive. Eagle safety Ralon Williams punched it in for the final two yards to get the rushing touchdown. This further extended the lead to 35-7 late in the third.

Woodville scored twice more in the fourth quarter. The first was a one-yard touchdown run by Taylor. Following another turnover by Corrigan’s offense, Eagle receiver Ronald Washington caught a 50-yard touchdown pass for the final points of the night.

This Friday, the Eagles play Little-Cypress Mauriceville for Woodville’s homecoming. Kickoff is at 7:30 p.m.