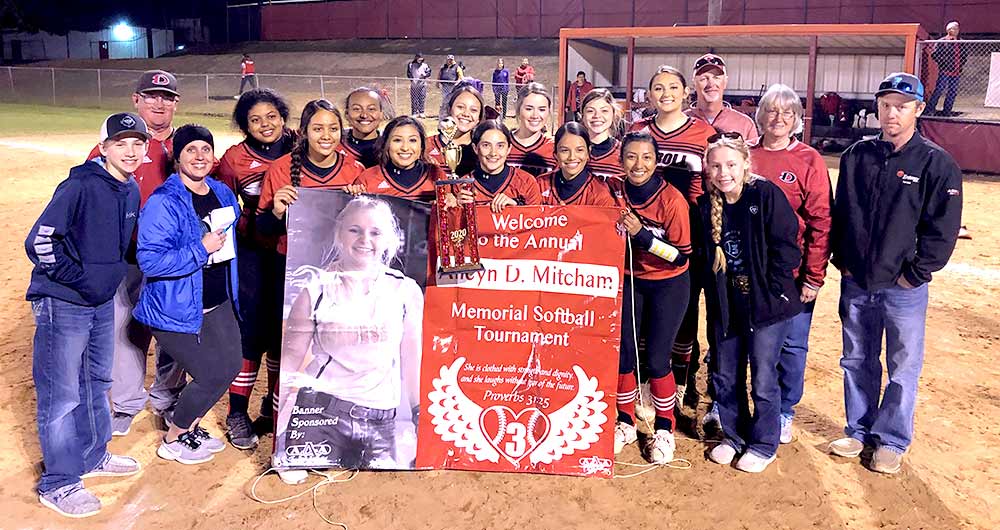 COLMESNEIL – On March 5, 6 and 7, the Alicyn D Mitcham Memorial hosted a high school softball tournament. The memorial hosts this tournament to raise funds to give out to kids in the community through programs and scholarships.

The tournament is designed to honor Mitcham, a Colmesneil High School senior who died in Winter Park Colorado on Feb. 15, 2017. The Memorial Foundation wishes to continue to honor and remember a sweet soul who ran ahead to Heaven before others were ready.

Throughout the weekend, over 250 girls showed up hoping to place in the bracket and win individual awards. Although it looked like the weather would hinder the tournament from beginning, countless volunteers including friends, family and lineman showed up to guarantee the girls would be able to play ball. 22 teams entered the tournament, and Diboll Varsity came out as champions. Following in second was Lovelady Varsity, and then the Colmesneil Lady Dogs placed third. In the JV bracket, Vidor came out on top as champions. Second place went to FTCA, a team who traveled from Louisiana, and third place went to the West Hardin Oilers.

As girls competed for top spots, fans could enjoy tons of food at each concession stand including barbecue sandwiches, cheeseburgers and even ribeye steaks.
As the memorial foundation watched games, individual winners were chosen. The prestigious Fearless award which includes a $250 scholarship was awarded to Cynthia Sizemore from Trinity Varsity. This award is given to a talented athlete who exemplifies an aspect of sweet Alicyn’s spirit. Defensive MVP was awarded to Kayla Palomino, #5 from Diboll. Offensive MVP went to Ashtyn Alvarez, #10 from Diboll. All Tournament Pitcher was handed out to Mimi Sandoval, #12 from Lovelady.

Overall, it was a beautiful weekend to honor a precious angel with softball. The Memorial Foundation will continue to make donations to Colmesneil ISD Athletics, Woodville ISD Athletics and the Tyler County Little League for both the girls and the boys. Along with donations, the foundation gives scholarships and gifts to each graduating senior of Colmesneil High School. In addition, the foundation has purchased and installed a new scoreboard at the Alicyn D Mitcham softball field, given monetary support to athletic funds, given scholarships and donated supplies to multiple organizations. Without the help of our generous sponsors, our event and giving would not be possible. The Alicyn D Mitcham is blessed and thankful for the continued support.