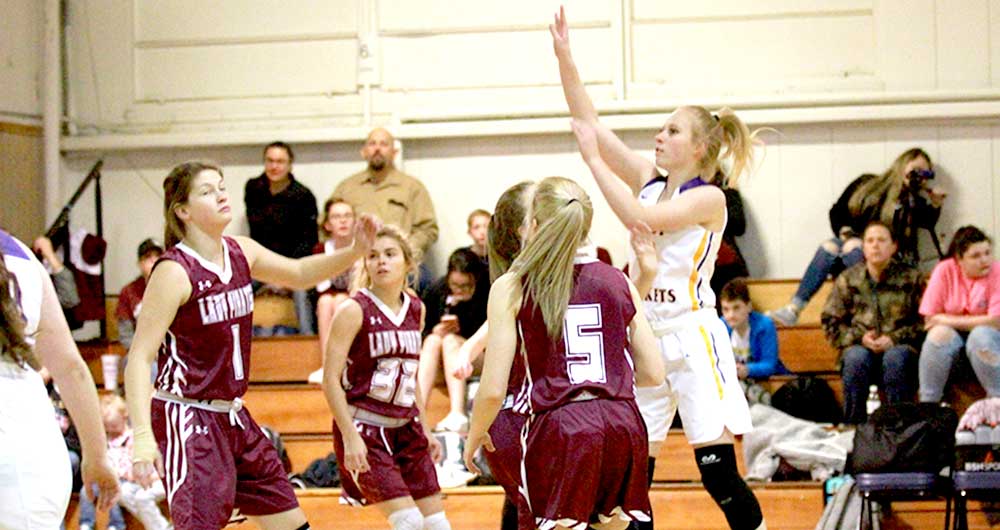 Lady Jacket Josey Sturrock takes a shot last week in the Jackets’ win against the Spurger Pirates. The Lady Jackets defeated the Lady Pirates by a score of 36-30.

The Chester Lady Jackets are nearing the end of district play and have won their last five games. The Lady Jackets defeated Spurger last Tuesday at home by a score of 36-30. Jasmine Mitchell led the team with 13 points and Annie Rayburn added eight points. Josey Sturrock scored 6 points, Trinity Jerkins scored 5 points, and Brianna Cowan and Emma Grimes each scored two points.
The Lady Jackets defeated the High Island Lady Cardinals in front of a home crowd on Friday, Jan. 31 by a score of 37-33. Jerkins went 6 for 6 at the free throw line for the Lady Jackets. Mitchell had 16 points, Rayburn scored 12 points and Grimes added two points.
The Lady Jackets will host Burkeville on Friday, Feb. 7 at 6 p.m. They will be on the road on Tuesday, Feb. 11 as they play Goodrich in their last district game of the season. Game time is 6 p.m.

Yellowjacket Basketball
The Jackets lost a nail-biter to the Spurger Pirates last Tuesday at home by a score of 32-37. J.D. Clarke led the team with 12 points. Braydin Davis was right behind Clarke with 10 points for the night. Jake Pitre and Luke Read each scored four points and Carson Thomson scored a basket.
The Jackets lost to the High Island Lady Cardinals in Chester on Friday, Jan. 31 by a score of 34-44. Davis was high point for the Jackets with 10 points. Clarke scored 9 points, Thomson scored eight points, and Pitre scored 7 points.
The Lady Jackets will play Burkeville at home on Friday, Feb. 7 around 7:15p.m. They will be on the road on Tuesday, February 11 as they face the Goodrich Hornets at 7:15p.m., or after the conclusion of the girls’ game.

Wild Game Supper
The annual Wild Game Supper put on by the Chester Athletic Booster Club will be held on Saturday, February 8th at 6:00p.m. in the Chester Cafeteria. The Alex Johnson Memorial 3 on 3 Tournament will also take place that day in the J.P. Johnson Gymnasium. For information on the 3-on-3 tournament, contact Pam Vinson at 936-465-8244. Addition details will be available on the Chester Buzz Facebook page.

Senior Night
Senior recognition for the basketball boys and girls will be held on Friday, February 7 at 5:40p.m., just prior to the girls game. Seniors are Annie Rayburn, J.D. Clarke, Jake Pitre, and Levi Goins.

50th Anniversary Boys State Basketball Recognition
The 1970 state champion Chester boys basketball team will be honored and recognized on Friday, February 7 at J.P. Johnson Gymnasium prior to the high school boys basketball game against Burkeville. The public is invited to come for the celebration.