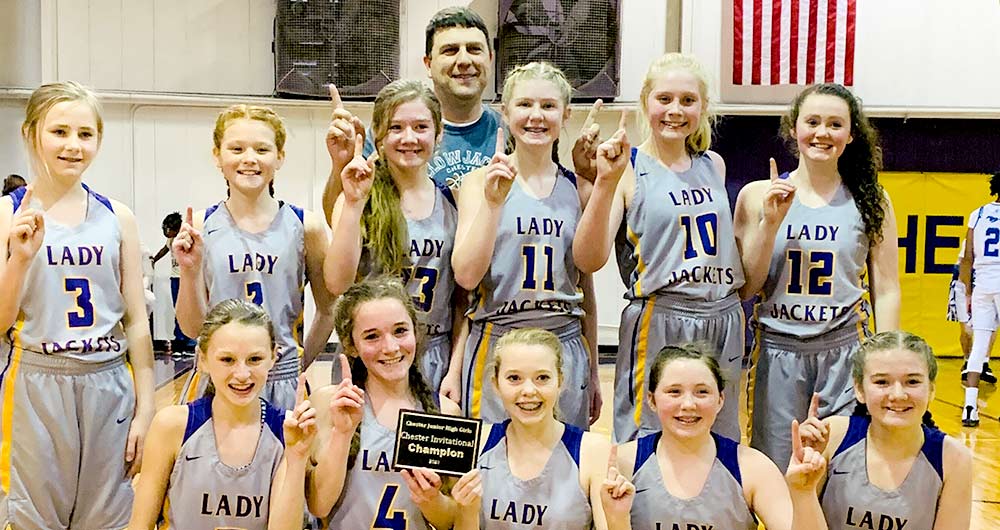 Chester hosted a junior high boys and girls basketball tournament last weekend on Jan. 16 and 18. The Chester girls took home the trophy after defeating Burkeville and Latexo. The girls remain undefeated for the season. The boys lost two tough games to Burkeville and Spurger.

The Junior high teams will travel to Burkeville on Thursday, Jan. 23 to take on the Mustangs. Game time is 5 p.m. On Saturday, Jan. 25, both teams will compete in the Colmesneil Tournament.

Lady Jacket Basketball
The Chester Lady Jackets opened district with a tough loss to the Spurger Lady Pirates on Friday, Jan. 10. The Lady Jackets battled hard all four quarters but lost the game 35-40. Annie Rayburn was the leading scorer for the Jackets with 17 points. Jasmine Mitchell scored seven points, Josey Sturrock and Emma

Rayburn led the Lady Jackets, again, in scoring with 16 points. Mitchell was right behind her with 15 points. Cowan scored 7 points, and Grimes and Sturrock both scored six points.

The Lady Jackets will at home on Friday, Jan. 24 to face the Goodrich Lady Hornets. Game time is 6 p.m. They will be at home again on Tuesday, Jan. 28 to take open the second round of district play. They will take on the Spurger Lady Pirates at 6 p.m.

Chester High School Updates
There was a lot of activity going on at Chester High School during Christmas break, even though the athletes were unable to get any games or practices in. Renovations were done to the lobby area of the high school gym. A new concession area was constructed, and the entrance to the school was moved. Also, the gym floor got touched up, just in time for district basketball.