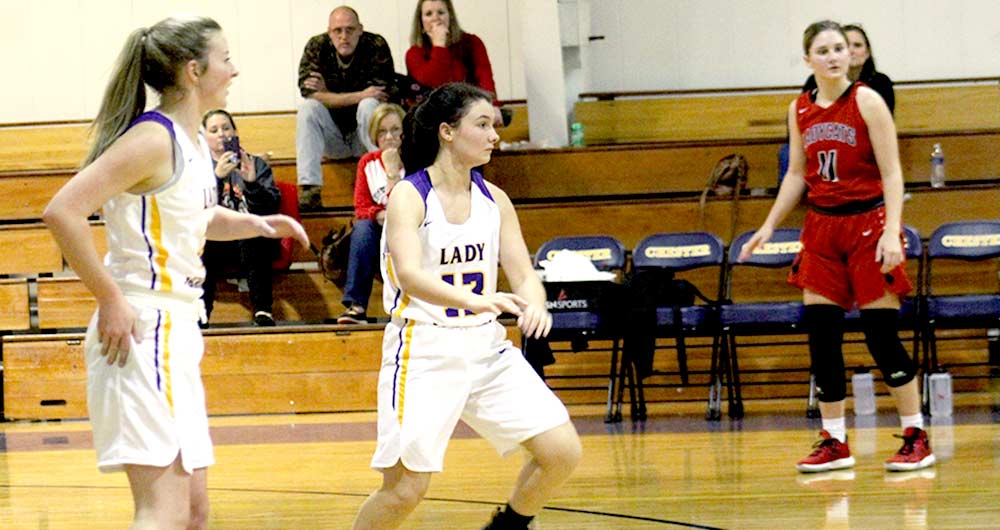 Lady Jackets Annie Rayburn and Jasmine Mitchell in a recent game at J.P Johnson Gymnasium. Rayburn and Mitchell both led the Lady Jackets in a 41-10 victory over Apple Springs on Dec. 17. (JANA RAYBURN | TCB PHOTO)

The Chester Lady Jackets have completed their pre-district schedule just before school let out for Christmas break with a victory against the Apple Springs Lady Eagles.

The game got off to a slow start, with the Lady Jackets trailing the Lady Eagles after the first quarter by a score of 1-2. However, the Jackets settled down and pulled ahead of Apple Springs, with a final score of 41-10. Leading the Lady Jackets in scoring was Annie Rayburn with 14 points. Jasmine Mitchell scored 12 and Brianna Cowan added 9 points. Josey Sturrock, Emma Grimes, and Trinity Jerkins each scored 2 points.

The Lady Jackets will be competing against Burkeville, Goodrich, High Island, Leggett and Spurger in District 29, which will get started after the new year.

The Lady Jackets travel to Spurger on Friday, Jan. 10 as they face off against the Lady Pirates. Game time is 6 p.m.

Yellowjacket Boys Basketball
The Chester Yellowjackets hosted the Good Samaritan Hornets on Tuesday, Dec. 17. The Jackets came out strong and were able to keep the lead the entire game, ending with a 30-24 win over the Hornets. J.D. Clarke scored 15 points for the Jackets, and Braydin Davis added eight points. Carson Thomson scored 3 points, and Jake Pitre and Luke Read each scored two points.

The Jackets will travel to Port Arthur to take on the Lighthouse Home School Lions on Tuesday, Jan. 7. Game time will be at 6 p.m.