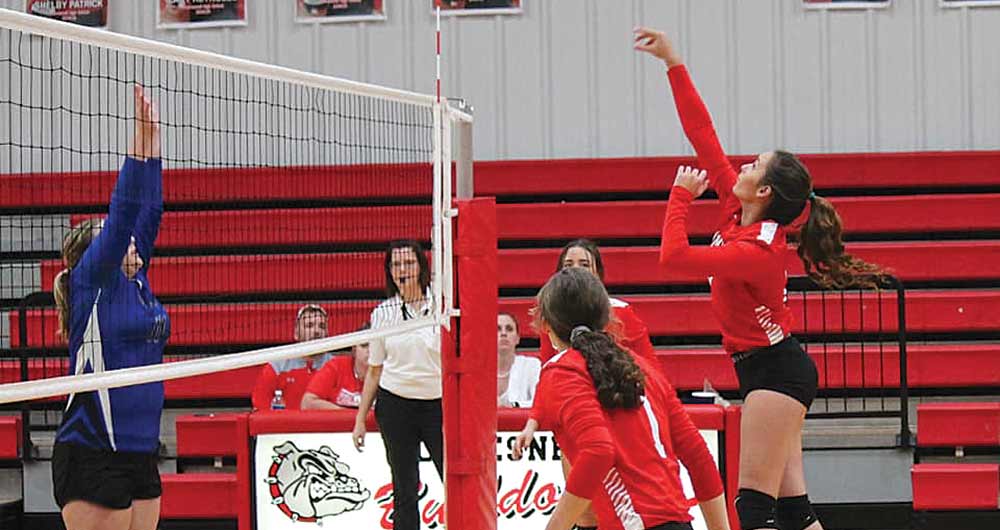 Junior Mikayla Odom goes up to hit the ball for the Lady Dogs.  (PHOTO COURTESY OF LISA ALEGRE)

The Lady Dog Volleyball team is preparing to take on the Groveton Lady Indians on Tuesday, Oct. 29. The game will decide if the Lady Dogs get first or second in district.

Both teams have one loss and will battle it out until the last point. In preparation, the Lady Dogs took on Apple Springs on and swept the team in three games. The final score of the first game was 25-18, the second ended in 25-8, and the third was 25-20. Last week the Lady Dogs also took on Goodrich on Friday, October 25 and won in three games. Senior Lacy Reynolds led the team in kills and tremendously helped the Lady Dogs to victory. The fate of the Lady Dogs will be determined after Tuesday night’s game. The time and date for the Bi-District game is TBD. Throughout district the Lady Dogs have fought hard and came together to overcome challenges and big competition. The post-season has a bright future ahead for the Lady Dogs.

The Bulldog Football team had a bye on Friday, Oct. 25, but prepared during the week for the crucial game against the Evadale Rebels, which takes place on Friday, Nov. 1 in Evadale. Kickoff will be at 7 p.m.

Senior Wesley Dobbins is excited to take on the rebels and said “I am ready to play, and we practiced hard during our bye week to prepare. This game means a lot to me because it is my senior year. We all have to give 100% and leave everything on the field.”

If the Bulldogs can win the next two district games, the team will be playoff bound. During their week off, the Bulldogs did a lot of fundamental work, tackling. And technique work. The Bulldogs have grown since the beginning of district and continue to grow and become mentally tougher.

Senior Kaleb Powers and Junior Mckayla Pittman traveled to Huntsville on Monday, Oct. 28 for the regional cross- country meet. Pittman placed 122 out of 170 girls and stated, “I have improved since my freshman year and plan to practice hard for my senior year. I have made it to regionals the past three years and my goal is to go to state for my senior year.”

Powers placed 58 out of 200 boys and stated, “My coaches over the past four years have pushed me to become the best athlete I can be. I have improved my time since freshman year, and I ran this year in 20 minutes on the dot. I am going to miss cross-country and the opportunity to compete at the sport I love.”