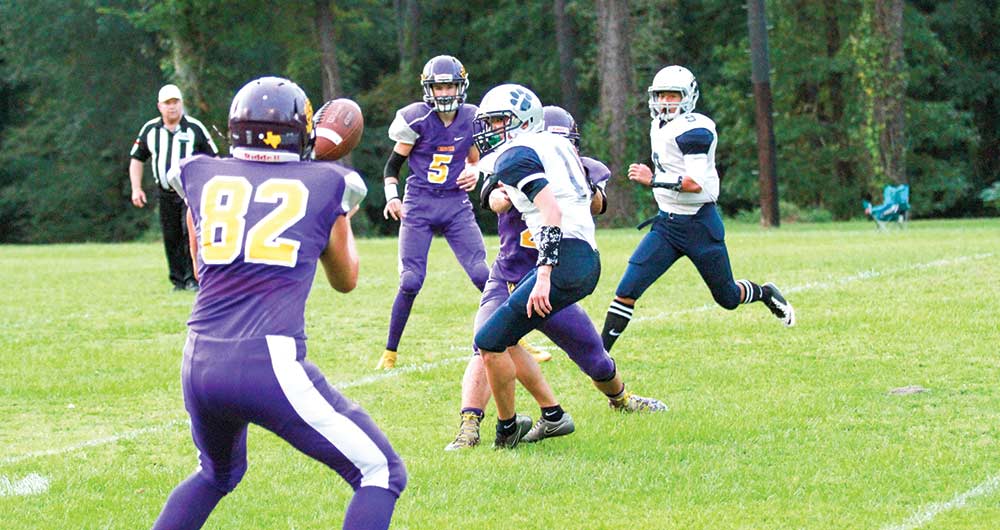 Carsyn Whitworth, #82 for the Jackets, takes a pitchout from Carson Thomson during last Friday night’s game against the Texas Christian Tigers. The Jackets beat the Tigers 66-0. (PHOTO COURTESY OF BECKI BYRD)

CHESTER – The Chester Yellowjacket football team hosted the Texas Christian Tigers on Friday, Sept. 20 in the first home game of the season.

The Jackets defeated the Tigers 66-0 in a game that ended at half time due to the mercy rule. Quarterback Jared Young had a great night for Chester, with eight carries for 182 yards. Young ran in four touchdowns, was 2 for 2 in passing for 37 yards and 1 touchdown. He also had a fumble recovery. Jake Pitre had five carries for 109 yards, three touchdowns, and a fumble recovery.

The Jackets will host the High Island Cardinals on Friday, Sept. 27 at 7 p.m.

The junior high Yellowjacket football teams have played only one game so far this season and are anxious for another win. The junior high will play High Island at home on Friday, Sept. 27 at 5 p.m., just before to the high school football game.

Lady Jacket Volleyball action rages on
The high school volleyball team hosted the Goodrich Hornets on Tuesday, Sept. 17. They had no trouble with Goodrich and defeated the Lady Hornets in three games. Jasmine Mitchell led in kills with 14.

The high school volleyball team traveled to Groveton on Friday, Sept. 20 to face the Lady Indians in a district game. Groveton has been a tough team to beat the past several years, and this game was no different.

The Lady Jackets lost games one and two by a close margin and came back to defeat Groveton in game three. However, the Lady Jackets were not able to come back, and lost game four. Coach Megan Nichols hopes to use this loss as motivation to bounce back in the second round of district.

Chester will start the second round of district with a home game against Apple Springs on Friday, Sept. 27 starting at 4:30 p.m. On Tuesday, Oct. 1, the Lady Jackets will make the short drive to Colmesneil to take on the Lady Dogs. Game time is 4:30 p.m.

The junior high volleyball teams were off last week. The teams will travel to Colmesneil on Monday, Sept. 30 to take on the Lady Dogs. Game time is 4 p.m.

Cross-country teams scheduled for October meet
The Chester cross country teams have Tropical Storm Imelda to thank for their off week, as the West Sabine Meet was cancelled due to the weather.
The teams will travel to Lufkin on Wednesday, Oct. 9 to compete in the Coke Classic meet.