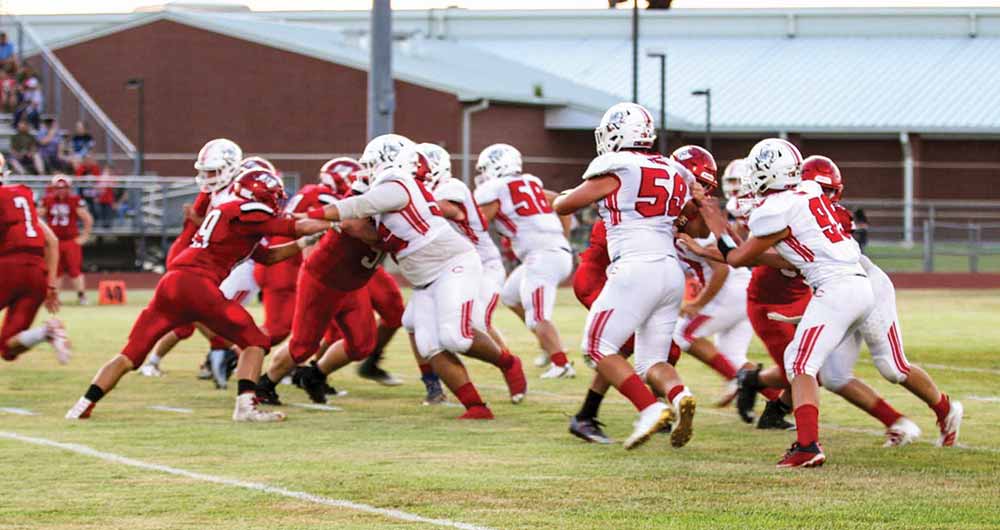 The Bulldogs keep their defense strong to keep the Pirates from scoring.  (PHOTO COURTESY OF DENA SETTLOCKER )

The Bulldog football team traveled to Deweyville on Friday, Sept. 6 to take on the Pirates. After the first quarter, the dogs were down by 0-14, but the game was only just beginning. Both teams fought hard during the second quarter and the Dogs went up 16-14.

As the second quarter came into play, both teams returned ready to play. The Dogs were down 30-36 with only a few minutes left in the fourth quarter and sadly, could not score before time ran out. The final score of the game was 30-36.

Despite the loss, the Dogs had great effort throughout the entire game and came back multiple times throughout the game. Sophomore Jayden Ferguson had a fumble recovery for a defensive touchdown. Senior Wesley Dobbins led the team in tackles.

Sophomore Kolyer Marshall and Junior Kobe Shird also played well on defense. Junior Jordan James threw for 120 yards in two touchdowns. The next game for the Bulldogs will be in Willis against Northside at 7 p.m. on Friday, Sept. 13.

Lady Dogs take on Timpson
The Lady Dogs volleyball team went to Timpson on Tuesday, September 3, and could not pull out a win. Despite starting the week with a loss, the Lady Dogs ended the week with a win over Kountze. The first game in Kountze came out with the lady dogs on top and a score of 25-10. Sophomore Kaitlyn Byrum led the team in serves with 12 serves. The second game the Lady Dogs fell out of rhythm and lost 23-25. The third and fourth game ended in the Lady Dogs favor. The volleyball team has improved since the first day of two-a-days and plan to continue to grow throughout district.