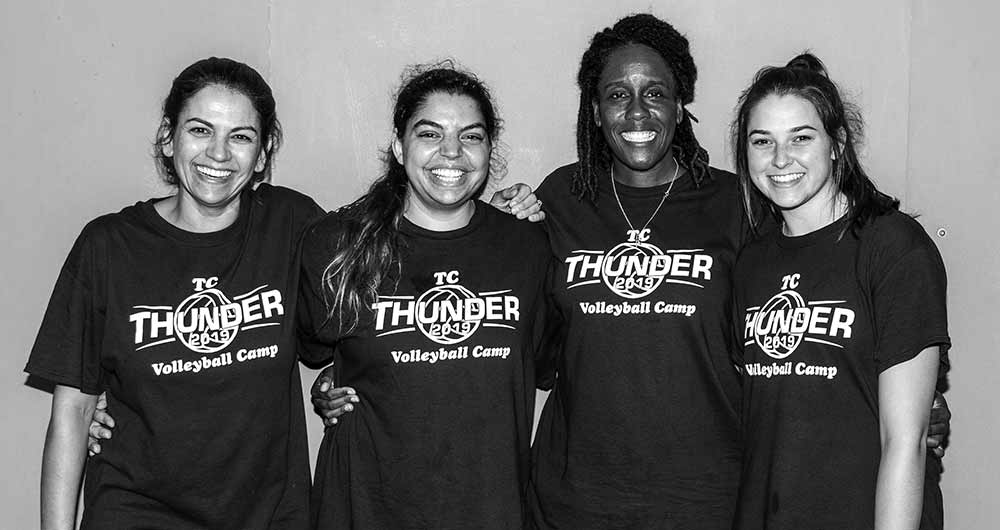 WOODVILLE –Tyler County Thunder Volleyball held its second annual summer camp last week at the Summit Gymnasium at Woodville High School. Luciana Babin once again headed things up to host a terrific camp for all volleyball players in the community, county and surrounding areas. Over 70 volleyball campers turned out for the three-day camp that was held Tuesday-Thursday and well over a dozen players took part in position-specific clinic on Friday.

This camp was created by three former Louisiana State University (LSU) volleyball players that left a great legacy at the LSU program. Luciana Babin, who was named as SEC Freshman of the Year, Gabriela Reis who is the daughter of Luciana’s sister Daniella Reis who was an All American and a member of the LSU Athletic Hall of Fame in her own right, and Nyla Shephard, also an All American who competed in 2 NCAA Final Four Tournaments. The LSU trio also enlisted the help from recent Warren High School grad Claire McEachern. Their goal is to share with volleyball players of Southeast Texas the skills, discipline and leadership that they learned during their time while playing at LSU.

“We can see the kids growing in their skills from last year,” said Shephard. “We feel like they can greatly benefit from any training they can get outside of the training they receive in school,” she added. Babin noted that it was great to see so many players that attended last year return for this summer’s camp.

“We work them on several physical drills, whether it be hitting, blocking, setting or ball control, but we also work on their mental approach to the game and to keep them sharp competitively, having a positive attitude in all situations and truly being a team player as well,” Babin explained.

“This isn’t something that we only teach, but we lead. We say these things but then we also get in there on the court with these campers and play right alongside them, displaying these character traits and showing them how to respect the game with our actions as well as our words.”

This really is a first-rate camp,” Babin said. Babin explained that it is a combination of several elements that make a really successful camp. “First of all, we have great facilities in being able to use the Summit and we are very grateful to Woodville High School allowing us to use this gym. We provide world class teaching from players who have played at an elite level and we have a diverse and high number of players who want to get better.”

Volleyball players from throughout the area attended the camp. Players from Jasper, Corrigan, Colmesneil, Warren, Chester were in attendance as well as some from as far as Colorado, Waco and Los Angeles, California. “We have received a lot of positive feedback about our camp and the skills and tools we teach and provide,” Babin said. “Many of these players have attended other college camps and report to us that they learn as much or more from the camp held right here in Woodville,” Babin added. “None of this would be possible without help from our local sponsors. Citizen’s Bank, Magnoia Bar and Grill, Elijah’s Café and the Stagecoach Inn have been instrumental in allowing us to provide this camp for the kids in our community and surrounding areas.”

Babin closed by saying “Tyler county is a great place to live. We encourage the people in the community to support their kids in their sporting endeavors. Every kid has the opportunity to come out and participate and doesn’t have to travel hours away to get first class instruction. It’s a great environment and we love being able to do this for the people and kids from Tyler County.”