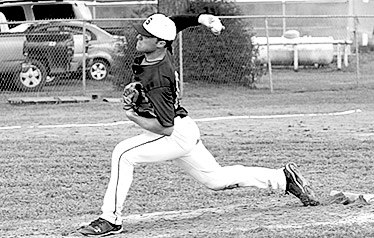 The Spurger baseball team took on Sabine Pass on Friday in a make-up game to replace the one that was rained out two weeks earlier. The boys knew that Sabine Pass would be a tough team to beat, and some expected the game to end in a 15-run rule like last season. But, in true Pirate fashion, the team gave the Sharks a true run for their money.

The first inning started out with Sabine Pass stepping up to bat first. The Pirates caught the first two batters' hits, and threw the third batter out at first base to take the game to the bottom of the first inning. Aaron Ford, the second batter in the Pirates' line up managed to hit a double, and a hit by Brett Bussel brought Ford into home, bringing the score to 1-0 with the Pirates in the lead.

No score was made in the second inning; both teams struck out at bat, and hit pop flies that were caught by the outfielders.

Sabine Pass started out the top of the third inning with a single and a stolen base that put a runner on second, but the next two batters were thrown out at first base. Then a single hit by the Sharks brought the runner into home, tying the game at 1-1. The Pirates had a chance to pull ahead of Sabine Pass in the bottom of the third inning, but all three batters struck out at the plate.

The Sharks saw their opportunity to get ahead of the Pirates in the top of the fourth and took it, with all three of their first batters making it to home plate, bringing the score to 1-4. The Pirates battled to get ahead and close the score gap, and managed to get a runner, Derreck Laurent, on second base; but Oliver hit a line drive to the pitcher, who threw Oliver out at first base, ending the inning before Laurent could make it across home place.

Sabine Pass scored another point during the top of the fifth, and had two more runners on base, but a fantastic double play by the Pirates ended the Sharks' batting, and brought the game into the bottom of the fifth. The boys knew that they had to close the score gap during that inning if they wanted a chance at a win, but they were batting the bottom of their lineup, and the first batter struck out. The Pirates managed to get a runner on second and third bases, but another strike out and pop fly ended the inning too quickly for the Pirates to score.

Sabine Pass racked up the points again in the top of the sixth inning and ran four runners into home, bringing the score to 1-7. The Pirates also began to come back in the sixth inning when the first batter, Brett Bussel, was walked to first, and then ran in to second when Derreck Laurent hit another line drive into the outfield. With runners on first and third, Cody Winkle stepped up to bat and drove home Bussel, bringing the score to 2-7 and putting a runner on first and third. The next batter, Cody Oliver, made another great hit to bring Winkle home, bringing the score to 3-7. The Pirates were definitely coming back, but the next two batters struck out swinging and brought the game into the final inning.

Sabine pass struck out twice in the top of the seventh, and the Pirates threw a batter out at first base for three outs. The bottom of the seventh was the Pirates' last chance for a comeback, and Hunter Smith got a great first base hit to start off the bottom of the seventh inning. Aaron Ford was thrown out at first, but Smith managed to steal second base. Then, Brett Bussel hit a double, bringing Smith home. The boys kept getting a few great hits, but a strike out by Oliver with the bases loaded ended the game for the Pirates. Although they didn't win, they improved 100% since last year and are looking forward to the rest of the season.

Both the baseball and softball teams will take on Evadale, in Evadale on the 20th and Legget at home on the 23rd. The tennis team will also play in the Woodville Varisty tournament on the 30th.