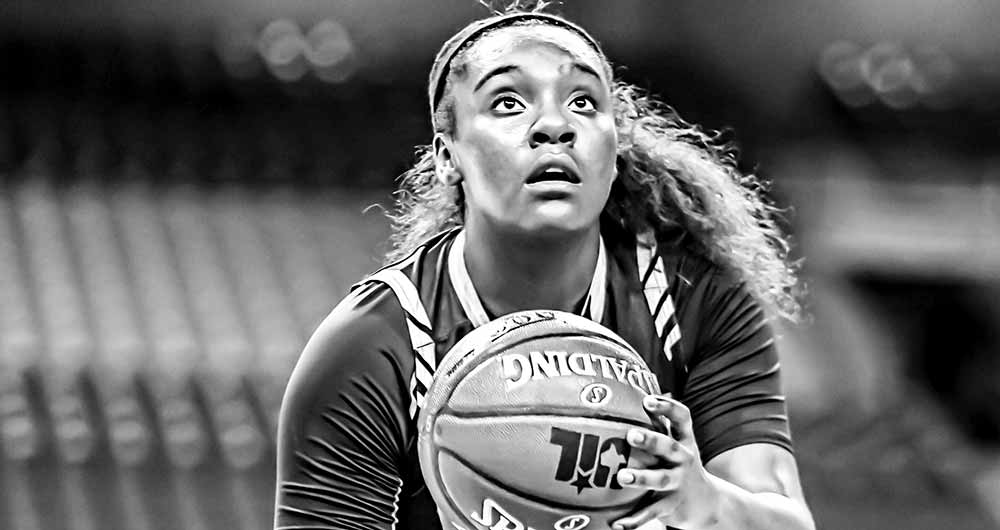 Aim High – Jordyn Beaty (23) from Woodville aims to represent Woodville, Tyler County and All of east Texas as she competes at the 2019 TGCA All Star Game in Arlington.” (HALE HUGHES | TCB)

WOODVILLE—Junior standout Jordyn Beaty continues to gather accolades after this year’s title run basketball season. Beaty was named Co-MVP District with her teammate Jayda Argumon. Beaty was named as an Calss 3A All-Region and Class 3A All-State player by the Texas Association of Basketball Coaches (TABC) and along with Argumon, was named by the UIL to the Class 3A All-Tournament Team at the UIL State Championships in San Antonio.

Beaty has also been selected to participate in the 2019 All-Star Basketball Game by the Texas Girls Coaches Association (TGCA). This All-Star basketball team is comprised of the best basketball players from across the state and hand-selected by TGCA from the 1A-4A classifications. Beaty is one of only 24 girls chosen to partake in this prestigious event. Teams have been named as Blue and Red, and each team consists of 12 players each.

Beaty will be on the Blue Team and play with players from as far north as Haskell (in the Abilene area) to Poth (San Antonio area) and will compete against girls on the Red Team comprised with players from as far north as Vega (Amarillo area) to Midlothian HS (Dallas area). This All-Star event will be held at Arlington Lamar High School on Tuesday, July 9 at 7:00 p.m.

Beaty remains humbled by the honor and hopes to represent her high school teammates, her school, community, the east Texas area and her family well as she competes. Beaty carries the lone distinction of being one of the only 1A-4A girls in the east Texas area selected to compete in this prominent event. “Coach Carrell told me about being named for this and we were excited to hear about it,” Beaty said when she was made aware that she’d been selected to play in this competition. “There are a lot of girls that play this same position as me,” Beaty explained. “I’ve played a lot of basketball games and know a lot of these girls that I’ve competed with and against. I hope to represent them in this recognition.” Beaty said she is flattered but continued to use the word ‘represent’ as she spoke.

Beaty said she knows that she represents her school and teammates and is well aware of even little girls who look up to her and want to play like her when they get older. But carrying the torch is something that Beaty is used to and doesn’t necessarily add any pressure in her mind. “It just makes me want to just work harder when I hear about so many people looking to me and having faith in my abilities.” Beaty gave some insight on what she does to stay at the top of her game. “I try to stay mentally focused, and be smart with managing my time between school, homework, and practicing.” Beaty says she tries to compete even in practices. “I always try to be first in anything, even when we’re running. If we are shooting layups or free throws or even doing something like sit-ups. I try to be the player with the most. It’s just little things like that, but always keeping myself competitive regardless of the surroundings.” Beaty is currently competing in track and field events for Woodville High School.

On weekends, Beaty said she stays sharp by running in her neighborhood and doing dribble drills just to keep her skill set at a high level. Beaty also competes with her select team from Alvin and will play with that team throughout the summer. Beaty noted that many college coaches recruit heavily during the select basketball season, primarily because the select summer season does not interfere with the regular college season which happens at the same time as the high school season. Beaty said she hopes to eventually play on a college team that plays with the same intensity that her high school team employs. Beaty said, “I like teams that execute hard, press is really good and push the ball in transition and create extra scoring opportunities.”

“Basketball is just something I just feel like I have to play,” Beaty explained. “A lot of it comes from my mom and dad. I guess you could say it’s in our blood.” And no one else has more faith in Jordyn than her parents, Stephanie and Ardis. Beaty explained that her mom played her college ball at nearby Angelina and her dad played at Kilgore and later in the Houston area. “My mom and dad both have a deep understanding of this game and what it requires. I play the same position that my dad played, and both of my parents have really good insight for me.” It’s more to Jordyn to not just represent the area, but her family as well. “I hope I do good for my school and community. But most of all, I really hope I make my mom and dad proud,” Beaty said.