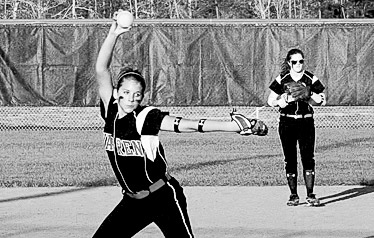 The Lady Warriors continued their stellar season with another win against the Buna Cougars on March 15. The team played as a whole and delivered an exceptional performance to add to an already promising future for the team. The game took place at home and was the team's third district game of the season.

Junior Kacy Priddy filled in as the pitcher for Warren as Senior Meagan McCluskey took the spot of catcher. During the top of the first inning, one run was scored before a double brought in two more players. Priddy contributed to the outs of the Cougars as she struck one player out and caught a ball from another batter. The Lady Warriors then came up to bat but were unable to make a score. Senior Shelby Ford hit in a single for the team; however, the team soon received its three outs before she could advance past first.

Priddy continued her solid pitching and the team held back Buna from scoring in the second inning. Chelsea Hammons, Meagan McCluskey, and Kati Crenshaw all hit in singles for their team, but none were able to make it back to the home plate by the end of the inning. The Cougars scored again in the third quarter but were out after Haley Roach caught a pop fly sent out to center field. Meagan Hollingsworth and Kacy Priddy both hit in the third inning, but the team still had yet to score.

Another double was hit by the Cougars and with the score at 0-6, the situation seemed relatively bad for the Lady Warriors. However, during the fourth inning, Brenna Johnson was hit in by Kati Crenshaw, finally placing the team on the scoreboard. Although that was their only score of the inning, it was a step towards walking home with a victory. Priddy and McCluskey demonstrated their powerful ability to work together and did not allow a single player on base during the fifth inning. Haley Roach, Jordan Spivey, Meagan McCluskey and Meagan Hollingsworth each had hits in this inning and Roach made it home via a double from Spivey.

The Cougars returned to bat and made some progress with one player getting on base and eventually stealing third and home to bring the score to 3-7. The tables began to turn in the sixth inning as Crenshaw, Johnson, Roach, and Spivey each made it onto the bases. A double from Spivey brought home Crenshaw and Johnson. Spivey then came home through a forced walk. A cripplingly powerful hit from Crenshaw turned into a triple and brought home three more players. The sixth inning ended in the Lady Warriors' favor at 11-7. The seventh inning was the Cougars' final chance to snag a win, but they were unable to make it onto a base. The game came to a close with the score at 11-7, with the Lady Warriors collecting another victory.

Warren's varsity baseball played a seven inning game against Big Sandy on March 17 at Warren. Although the Wildcats quickly snatched the lead in the first inning, the Warriors were able to tie the game in the third inning. The teams tied up again during the fifth inning and, after a scoreless sixth inning, the Warriors grabbed onto the lead and finished the game with a score of 5-4. The team will play against Hardin on March 23 at home. The game is set to begin at 6:30 p.m. This will be the Warriors' sixth district game.