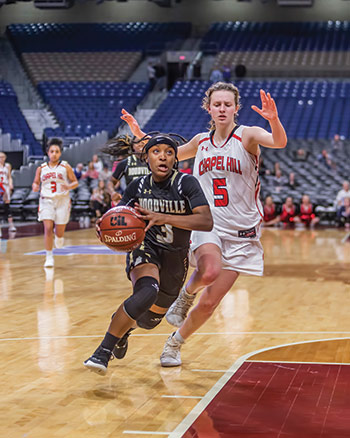 Tenacious Telia – Woodville’s Telia Jackson (3) races past a Chapel Hill defender for a score in the state championship game in the Alamodome. (HALE HUGHES | TCB PHOTO)SAN ANTONIO—The Lady Eagles showed the state that they are among the elite teams in Texas by advancing to the state championship 3A basketball game. The Lady Eagles used speed, a smothering defense and supreme ball handling skills as well as good decision making to find the open shots all season to take their place on the grandest stage in high school basketball.

The Alamodome hosted all teams where players and coaches were treated to one of the finest championship venues in the nation. Woodville (39-1) advanced to take on the unbeaten Chapel Hill Red Devils (36-0) in a matchup of both 3A teams with the highest winning percentages of the season. The Lady Eagles showed that they were up to the task and entered the game firm and undaunted against Chapel Hill and were not intimidated by their record or pedigree. Woodville’s Jordyn Beaty won the tip off and the Lady Eagles quickly went to work. Woodville jumped out to an early lead with Jayda Argumon hitting a three-pointer followed up with a jumper by Beaty. Beaty made a quick steal to allow Kayla Merchant to land an early layup to give the Lady Eagles a 7-2 run to start the game. Telia Jackson hit a free throw and Woodville was all gas and no brakes as they used the early momentum to their advantage. After a missed Chapel Hill shot, Merchant rebounded, and Jackson found Merchant open at the other end of the court to feed her the ball for another layup, giving Woodville a commanding 10-2 lead. Argumon and Beaty made back to back shots from the floor and then Argumon again hit from deep three-point range to give the Lady Eagles a whopping 17-7 lead with just over a minute remaining in the first period as Woodville flexed their muscle against the best the state had to offer.

The second period began with a 17-10 Woodville lead, but Chapel Hill showed why they were undefeated. The Red Devils made a three-pointer, a layup and two free throws to tie the game at 17 with 6:11 left in the second period. This was developing into a game of runs as each team was able put together a string of scores. The lead changed hands back and forth and Woodville had the upper hand 21-18 thanks to a couple of tip ins by Beaty.
The score was again tied 24-24 with 1:12 left as Woodville and Chapel Hill battled for the lead before halftime. The Red Devils were able to convert a layup at :16 to take a narrow two-point lead into the break.

Teams returned from the break looking fresh and ready to finish this epic battle with the state title in the balance. Woodville’s Beaty quickly tied the game at 26. Chapel Hill then copied what Woodville did to start the game as the Red Devils went on a 12-0 run to jump out to a 39-26 lead by the 4:26 mark of the third period. That run gave a tremendous amount of momentum to Chapel Hill and they leveraged that momentum to control the tempo of the game. Woodville remained resilient and battled back to narrow the gap, but Chapel Hill maintained the lead for the remainder of the period, as the third came to an end with a 40-35 Red Devil lead.

The fourth period was much like the third, with Woodville continuing to battle back. It was Woodville who made the game’s next run, and with a tip in by Merchant, the Lady Eagles found themselves tied up once again, 43-43 with four minutes left in the game.

In a game that swayed back and forth, it ended up being Chapel Hill who had the final run, forcing Woodville to resort to fouling to save time on the clock and hoping for missed free throws. Chapel Hill was clutch from the free throw line as they finished the game with a 55-46 win over the Lady Eagles.
Beaty led all scorers with 22 points. Beaty was 10 of 19 from the floor and one-of-two from three-point range. Jayda Argumon was 4 of 7 and 2 of 4 from three-point range and had 10 points, while Kayla Merchant finished with six points and Telia Jackson added five points.

This was a tremendous year for the Lady Eagles who played more games during this season than any other 3A school in the state. It should be noted that this was also one of the most successful seasons on record in school history.