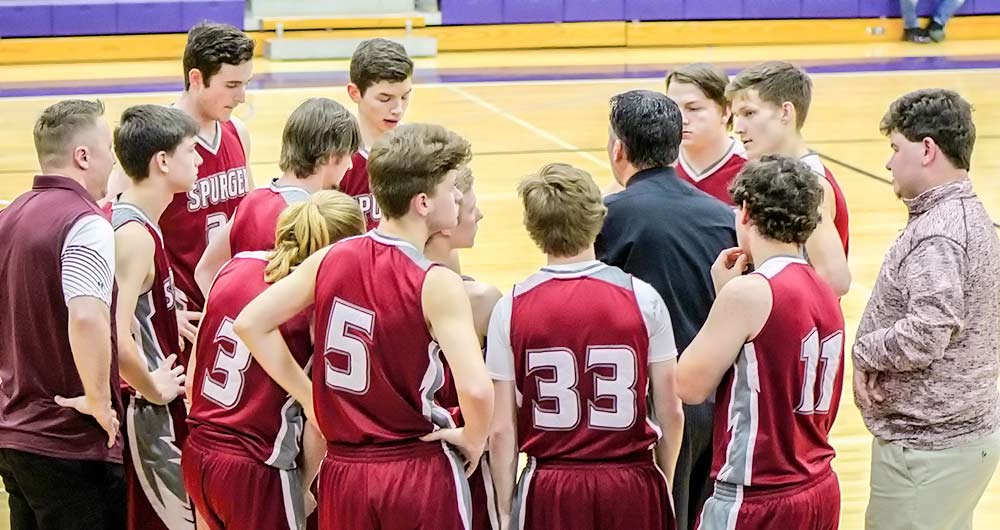 Spurger boys competed first on Monday in the Bi-District game against Dime Box at Willis High School. Starting for Spurger were: Tyler Dozier, Hunter Jenkins, Samuel Sirmons, Gantt Stone, and Samuel Tompkins. Dime Box started a full court press from the opening tip off. Dozier would score first for Spurger and follow with a three-point shot from above the line. Hunter Jenkins got control of the ball and sprinted down court for the assist to Dozier for two. Sirmons performed well for the Pirates at the post position (7-20). Colton Jenkins and Jacob McFarland made their way into the game for the second quarter. Sirmons got the ball to McFarland who drove through the lane for two. Hunter Jenkins passed to Colton Jenkins for a three-point shot. Dozier made four of six free throws at the line for the Pirates (18-35).

The third quarter started with Tompkins driving down the court, through defenders, to score two. Stone passed to Hunter Jenkins for a lay-up. Zack Covington hustled on the court for Spurger, but only made brief appearances because of a previous injury (23-55). The final quarter started as Hunter Jenkins scored off an assist from Dozier. Stone was fouled and made both free throws. Coach Lin Ellis introduced the rest of his team to the game. Caleb Donatucci, Christian Russell, and Billy Williams made their way onto the court to play for part of the fourth, alongside Covington and Colton Jenkins. Donatucci was fouled and made both free throws. Dozier passed to Stone to McFarland for the basket. With five seconds left of the game, Covington stole the ball, turned, and made the three-point shot at the buzzer (37-75). Although this game did not result in a win, the boys played a good game to the end, held their heads high, and represented Spurger proudly.

The Lady Pirates traveled to Hallettsville, last Tuesday, to compete against Rocksprings in the Regional Quarterfinal. The game opened with a pass from Shelly Martin to Gracie Greenwood for the basket. Lauren Griffin would steal the ball for the Pirates, and Kenzie Hatton later deflected the ball as Rocksprings was passing in. Griffin made a three-point shot, and both Shelly Martin and Tabitha Martin made baskets (9-10). An assist in the second quarter from Hatton to Greenwood would add three to the board. Greenwood was one of two at the line (13-30).

In the third quarter, Tabitha Martin was fouled and made one of two free throws. She then assisted Hatton for three. Hatton also passed to Greenwood who would score two (19-40). The last quarter of the game, the ladies continued to push hard. Abigail Sirmons was one for two at the line. Greenwood made two baskets for Spurger and passed to Hatton for three. Hatton then stole the ball and made a lay-up for two. At the end of the game, the score was (32-55). The ladies did not secure the win but had an outstanding season. Along with their coach, Kristi Henderson, they proved what hard-word, dedication, and the love of team can do.

As a reporter, nothing is more meaningful than to follow and report on the school you were once a part of. Our lives are more than one game, one season, or one school year. It is these collective moments and memories in time that make us who we are. May we always strive to do our best in everything we do. #forhim