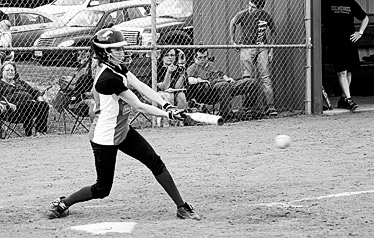 The Colmesneil Lady Dogs took the field against Chester last Friday in a longtime rivalry game. The Lady Dogs trailed early on, giving up a run to the Yellow Jackets in the top of the first inning. After that small slip up, the Lady Dogs were able to rebound, thanks to Elisabeth Bryan's two-run single in the bottom of the first inning. After a solid inning of pitching by perennial All-District pitcher Ali Harvey, the Lady Dogs were able to put their foot on the gas, and they never let up. The Lady dogs were able to drive in six runs in the second inning, led by a plethora of RBI's from Stormy Thompson, Allie Monk, and Ali Harvey. Kara Standley's two-run double in the bottom of the third inning was essentially the dagger that put that this game out of reach, and led to Chester being 10-run ruled, ending the game with a final score of 11-1, after playing only five innings. The Lady Dogs also took on Brookeland last week, beating them in a nail-biter, 6-5. They also played a make-up game last week against West Sabine, defeating them by a score of 10-5, giving the Lady Dogs an undefeated 3-0 district record. The Lady Dogs' next game will be in Zavalla on Friday, March 23.

The Varsity boys' baseball team also played Chester last week. The Bulldogs started this game on fire, scoring five runs in the first inning, led by Daniel Bruton's two-run home run in the first inning and Chris Flournoy's double. The Bulldogs caught a few breaks, highlighted by several errors made by Chester. The Bulldogs were able to capitalize on those errors, though, topping the second inning with seven runs, including RBI's from Daniel Bruton, Dylan Falcon, Chris Thedford, Kolton Bass, and Chris Flournoy. With a 12-run lead after the second inning, the Bulldogs put themselves in a great position to walk off the field with a 3-0 district record. Like the Lady Dogs, the Bulldogs ended the game early after only five innings with a final score of 16-0. The Bulldogs are undefeated in district, and it looks as though the more they play, the better they get. They've scored 29 runs and only given up five runs in those first three games, giving them an average margin of victory of about eight runs per game, meaning that the Bulldogs are dominating opponents. The Bulldogs are in the driver's seat in the district right now, and will travel to Zavalla on Friday, March 23, in what is likely to be to be a battle for sole possession of first place.