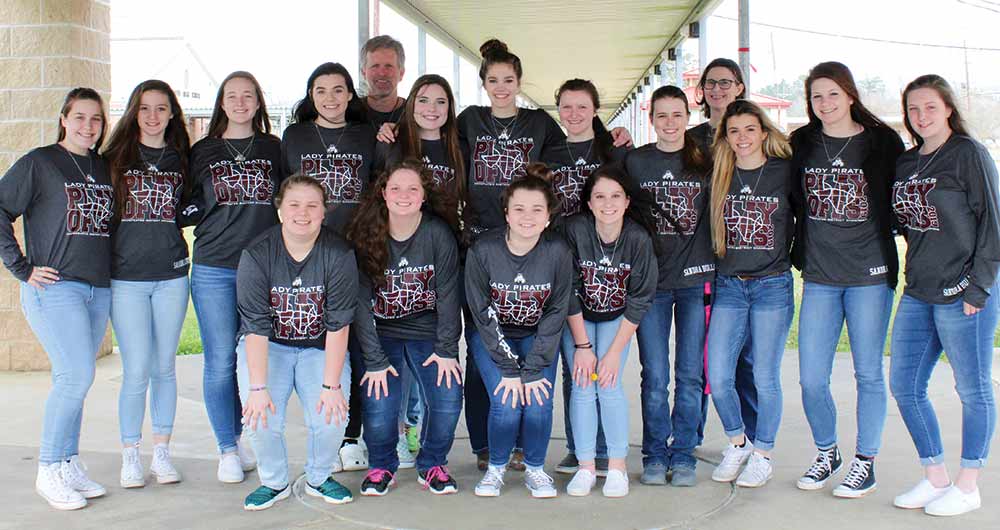 The Spurger Lady Pirates, and a caravan of fans, traveled 220 miles to Schulenberg High School last Friday evening. They faced off against Nueces Canyon for the Area round play-off game, and a chance to continue their run to State.

Starting for the Lady Pirates were Gracie Greenwood, Lauren Griffin, Mckenzy Hatton, Shelly Martin, and Tabitha Martin. Spurger wasted no time, as they gained the opening possession and put two on the board. A quick pass from Hatton to Tabitha Martin for the basket was followed with a nice assist from Hatton to Shelly Martin for two. Greenwood passed to Abigail Sirmons in the lane to score. Griffin deflected the ball from an opponent and gained possession only for Nueces Canyon to steal it back. Spurger recovered the ball, and Greenwood scored off an assist from Griffin. The score was (14-12) at the end of the first.

The second started with a pass from Griffin to Greenwood for three, followed by an additional three from Griffin. The ladies continued their work as a unified team, as the ball went from Greenwood to Hatton to Shelly Martin for two. Krissy Porterfield entered the game and would connect with Tabitha Martin for the basket. Nueces Canyon attempted to run the clock with one-minute left, but Shelly Martin stole the ball and the half ended (32-26).

Shelly Martin started the third with a three of her own, and Griffin rebounded and made the basket. Hatton faked a three-point shot and passed to Tabitha Martin under the goal for two. Greenwood was fouled and made one of two at the line. Griffin chunks the ball, with no better word, to make the basket to the delight and cheers of the team and fans. The third quarter ended with a 19-point lead (53-34).

Hatton found the open lane in the fourth to drive in and score. Greenwood stole the ball from an opponent, sprinted down the court, and made a jump shot for two points. With one-minute left of the game, fans stomped and cheered from the stands as the victory was in sight. Griffin shot a three to end the game, and the Lady Pirates won Area (65-49). Greenwood was high scorer with 17 points.

Spurger varsity boys had a warm-up game last Saturday, against 2A Hull Daisetta, to stay prepared for play-offs. Spurger got off to a good start when Samuel Tompkins scored two for the Pirates. A quick steal by Zack Covington and pass to Hunter Jenkins who then ran back down the court for the shot. A crosscourt pass from Tyler Dozier to Jenkins for three was met by cheers. Gantt Stone was two for two at the line off a tech called on Hull Daisetta. Dozier stole the ball and passed to Stone for two, and the first ends (19-9).

Jacob McFarland shot and made a three early in the second, followed with a steal from Samuel Sirmons to Dozier for two. Spurger played well as a team, and it showed when Dozier passed to Jenkins to Stone for a lay-up with his back to the goal (35-26).

Spurger continued to keep the win within their sights as they started the third. Jenkins would make a series of threes, and Sirmons continued to rebound and had a steal. A long pass from Dozier to Jenkins to Sirmons for two would end the quarter (49-39). The fourth quarter sealed the deal for the Pirates, as they won the game (57-54). The boys played well as a team and looked ready for the road ahead.

The Lady Pirates travelled to Hallettsville for the Regional Quarterfinal game against Rocksprings, on Feb. 19. Results for both teams will be in next week’s edition.