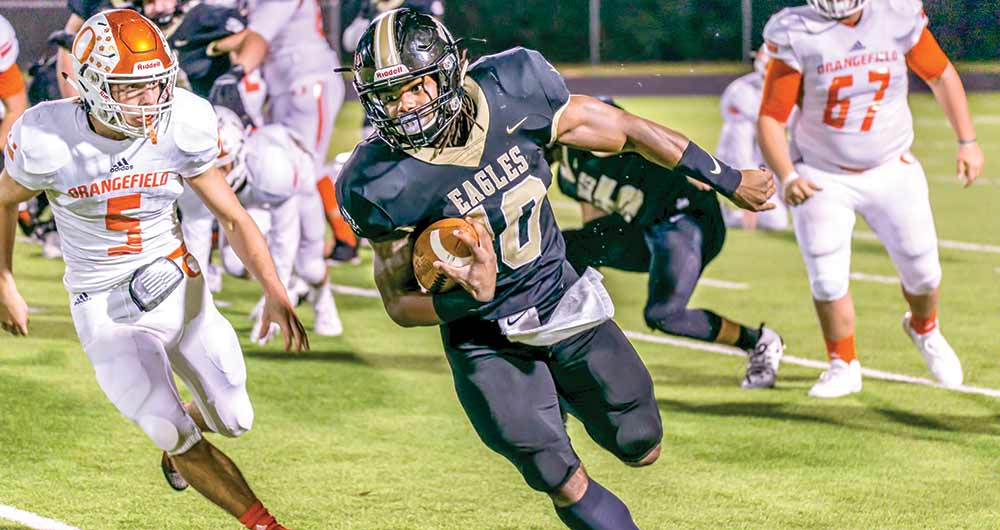 HALE HUGHES | TCB Flying High – Woodville Eagle Zack Martin (10) will continue to soar as a Warhawk for the University of Louisiana-Monroe.

WOODVILLE—From being an Eagle to a Warhawk, Woodville senior Zack Martin will continue to fly high as he officially signed his national letter of intent to play football at the University of Louisiana Monroe (ULM). Martin is a four-year letterman for the Eagles and is believed to be the first NCAA Division I football recruit from Woodville in 34 years according to head coach Ty Robinson.

Martin said that he dreamed of playing at the next level for many years, but his recruiting journey really started over a year ago when colleges and universities began contacting him. Martin stated that he had several offers, but ultimately chose ULM due to the camaraderie he found with the coaching staff and the style of football played in Monroe.

“The coaching staff just felt like a really good fit for me,” Martin said. “I feel like ULM head coach Matt Viator and the system that the Warhawks run will put me in the best position for success.” Martin said that they run an open style of football with a spread offense. Martin said that he expects the coaching staff will initially look to use him as an all-purpose player with time at running back and special teams as they develop him into their system as he matures within their program. Martin was a two-way player for the Eagles at running back and free safety who was named as the District MVP the last two years and an honorable mention all-state player. Martin was instrumental in leading the Eagles to a 30-5 record over the last three years, including the school’s first ever 11-win season this year and three consecutive district championships—also a first for Woodville.

Eagle head football coach Ty Robinson said that Zack Martin has been a perfect model of success since Robinson arrived in Woodville three years ago. “First of all, Zack has taken care of his grades. NCAA has increased the standards of eligibility to play and a student’s GPA factors in along with ACT and SAT scores. If one is lower, then the other has to be higher for admittance into programs and there are a lot of great athletes across the nation, but just don’t have the grades to qualify to compete in the NCAA,” said Robinson. “Zack has worked hard in the classroom and on the field that has given himself this opportunity. He’s been a great student and has had a great work ethic.” Robinson continued to praise Martin. “He hasn’t only not missed a practice, Zack hasn’t missed a workout, whether it be in summer or off season or weekend and that is a testament to his character and what kind of kid he is. He’s a solid Christian kid, who is very humble and puts others before himself and I feel like ULM got a steal of a Texas high school recruit,” Robinson said.

Robinson also explained that ULM was an athletic program on the rise as well as a university that was expanding by adding a medical school to the campus. “I think Zack is getting a unique opportunity at a tremendous time with ULM,” explained Robinson. “I’ve known the guy who recruited Zack for years. Zack was on several schools’ wish list and at a football camp in Marshall last summer, Zack had a particularly good day and the ULM coach told me that ‘He has an offer from us at Monroe’,” Robinson explained.

Martin was one of 17 to sign their letter of intent with the Warhawks last Wednesday on the first day players could officially commit to universities. Players from Texas and Louisiana and as far as Mississippi and Arkansas will join ULM next year along with Martin. ULM head coach Matt Viator spoke about getting players like Martin that came from successful programs. “I think it’s important that we get guys in from winning programs that understand the process. It helps to bring in guys from an environment of success, and we’ve certainly tried to do that.” Viator said this specifically about Martin, “Zack is a highly skilled football player who had a major impact on both sides of the ball. He’s an extremely athletic back who runs with a combination of speed and power.”

Viator also spoke about getting quality recruits like Martin that had size, strength and speed and said that players are interested in and seek to come to ULM. “We try to recruit the best players and we have had great responses. This university has great things to offer and with the players we are getting (like Martin), we can play with anybody in the SunBelt Conference.”