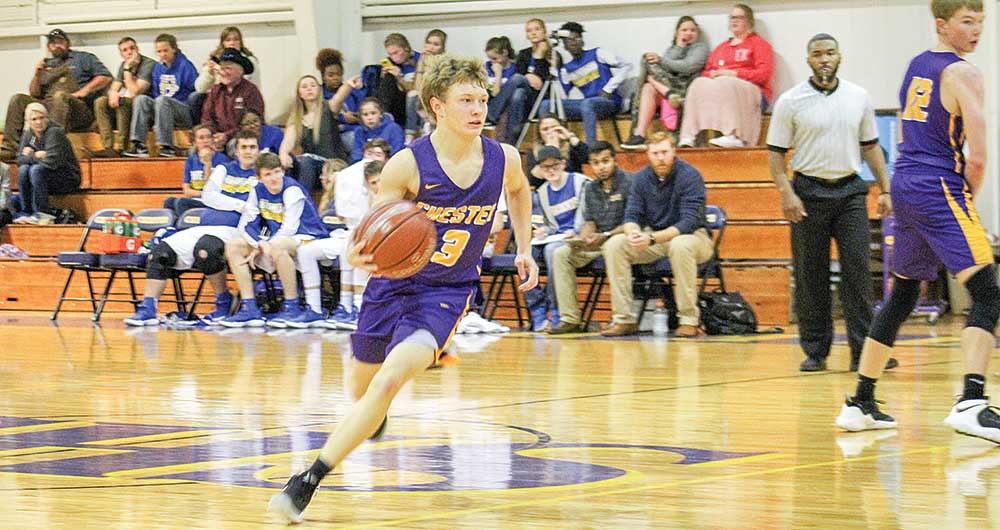 CHESTER – The varsity boys got their first win of the season last weekend in the Apple Springs Holiday Hoops basketball tournament. The Jackets played Apple Springs on Thursday, losing to the Eagles. The next day, Chester played Groveton JV, winning the game 34-14. J.T. Martin scored 14 points, while J.D. Clarke and Jake Pitre each scored 8 points. Braydin Davis and Luke Read each scored a basket for the team. Saturday, the Jackets lost to Jacksonville JV. Coach Donald Mayhugh is pleased with the progress the team is making. Mayhugh said, “We played in a couple of tough games, but I feel that it will help us prepare for the rest of the season.”

On Tuesday, Nov. 25, Chester hosted the Brookeland Wildcats. Chester played an aggressive game defensively, but the Jackets could not keep up with the Wildcats. The Jackets were edged out by the Wildcats by a score of 30-57. Martin had 17 points against Brookeland. Clarke added 5 points, Pitre scored 4 points, and Read and Davis each had 2 points for the night.
The Jackets will be on the road to Sulphur Bluff on Thursday to compete in the Cap Herman Tournament, which will be held Dec. 6-8. The team will be on the road again on the following Tuesday, Dec. 11, as they take on the Douglass Indians in Douglass. Game time is approximately 6:30 p.m.

The Lady Jackets will be traveling to Sulphur Bluff to take part in the Cap Herman Basketball Tournament Dec. 6-8. The team will be on the road on Tuesday, Dec. 11, as they travel to Douglass to take on the Lady Indians. The game will start at 5 p.m.

JUNIOR HIGH BASKETBALL
The junior high boys and girls played against each other on Monday, Nov. 26. The Jackets were scheduled to play Good Samaritan Fellowship from Fred, but the team did not show up to play. With the stands full of spectators and the referees present, the coaches made the decision for the teams to battle it out. It was a fun night, and the fans enjoyed watching the athletes. In the end, the boys team won, but not by very much! Playing on the girls team are Savannah Boyd, Kat Knox, Koree Hilliard, Aniya Dove, Lily Read, Sealy Hines, Handley, Handley, Emma Byrd, Watson, Emma Grimes, Boys team members are Jack Rayburn, Jakori Davis, Chase Bertrand, Bertrand, Cole Clarke, Jeff Knox and Keighen Green.

The Chester junior high boys and girls basketball teams will play host to Apple Springs on Monday, Dec. 10. The girls game will start at 5:00 p.m., with the boys game to follow.