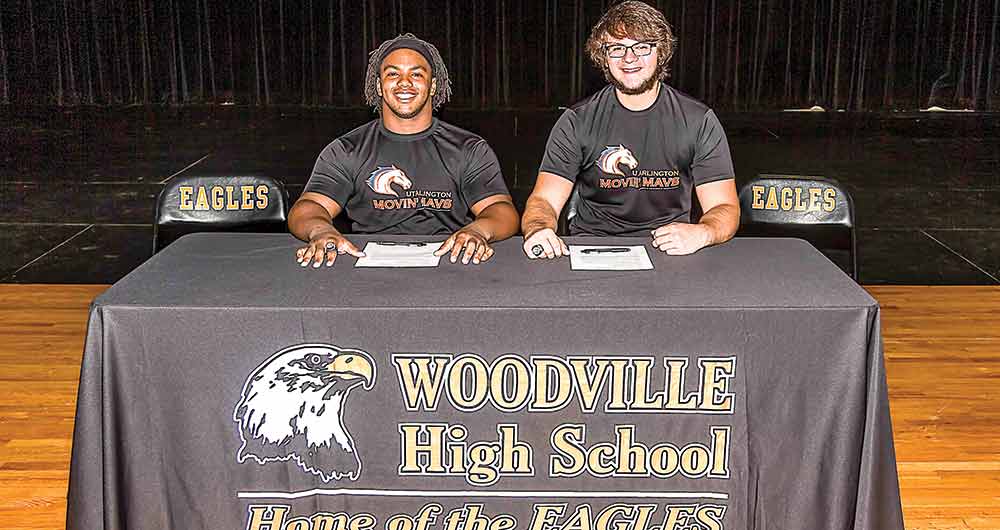 WOODVILLE—Two Woodville seniors signed their national letters of intent last week to play wheelchair basketball for the University of Texas at Arlington. Carrington Marendes and Garrett Castillo both inked deals to play for the Movie’ Mavs for the next four years on one of the top wheelchair teams in the nation.

Both Marendes and Castillo were heavily recruited nationally after competing all over the country and winning nationals with their Hermann Memorial “Hot Wheels” team out of Houston.  Both athletes competed in cities like Atlanta, Indianapolis and Dallas among others. The two athletes have been named wheelchair basketball All-Americans and both were multiple All-Tournament team selections throughout the year. Marendes was named MVP of the national basketball tournament.

Basketball isn’t the only sport these young men play. In wheelchair softball, both Castillo and Marendes are National Champions with Marendes again being named the MVP of the national tournament while Castillo was named as the best hitter in the nation.  Marendes also has some hardware from the UIL State Track and field meet as he won the 400m and took silver in the 100m and a bronze in the shot put.

Coach Trice Hamm from the Hot Wheels team and University of Texas at Arlington Wheelchair Basketball coach Garner were on hand to witness these young men ink their deals with the university. It is a rare thing to have the top two national recruits going to the same school in one sport and even more remarkable that both athletes are from the same high school.

Woodville is proud to be home to these young men and they represent what is best about Tyler County and our community and we wish both of these young men the best as they prepare to play at the next level.