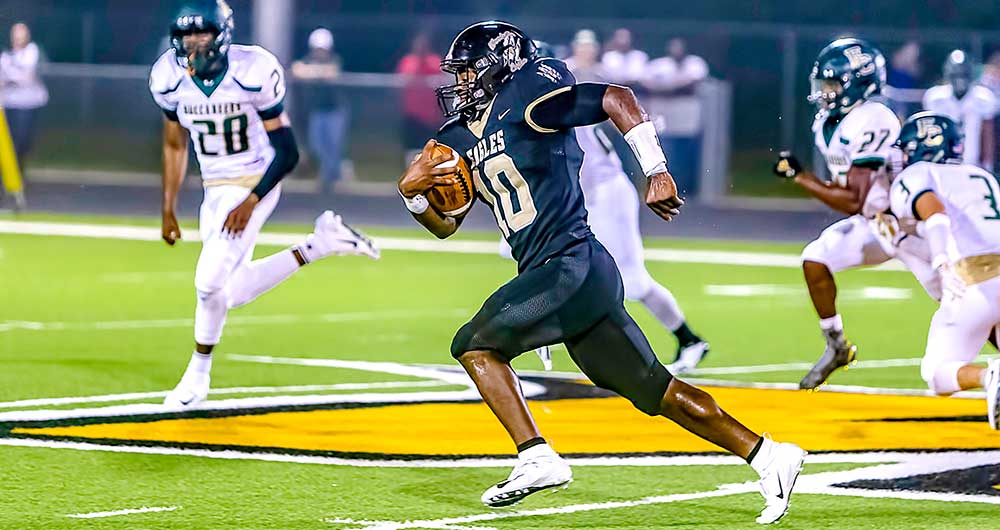 WOODVILLE — The East Chambers Buccaneers traveled to Woodville as one of the main district threats to dethrone the reigning two-time Woodville Eagle district champs.

East Chambers proved to be as good as advertised as they started strong and finished strong, but there was just too much Woodville in between for East Chambers to handle.

The Buccaneers arrived and made a statement with a great return on the opening kickoff down to the 25-yard line. East Chambers looked to be in great shape offensively, but Woodville’s self-titled “K-9” defense showed why Woodville controls the district and shut down the drive to force the Bucs to attempt a field goal. An Eagle penalty gave East Chambers a new set of downs and the Bucs capitalized on the early miscue and took an early lead after scoring the game’s opening touchdown.

Woodville would answer by putting together a drive with seniors DaMichael Brooks and Zack Martin trading duties of toting the ball with Martin scoring. The point after attempt (PAT) was blocked giving the Buccaneers and early 7-6 lead.

An attempted on-side kick by the Eagles was not recovered, giving the Bucs good field position to start their second drive. A bit of razzle-dazzle with a flea-flicker play allowed East Chambers to score on their second play from scrimmage on a long TD pass. That score allowed the Buccaneers to pad their lead to 14-6. That momentum that East Chambers had was short lived as on the first play of Woodville’s next drive, Martin took the ball from the Eagles’ own 33-yard line and ran 67 yards, swatting away Buccaneer tacklers left and right along the way. The Eagles elected to go for two on the PAT and were successful to tie the game up at 14-14. It also sent a message to the Buccaneer faithful that the Eagles also showed up to win this game.

It was a fabulous firework filled first quarter with a great deal of scoring between the two teams. East Chambers fought back with a limited drive and was able to score a field goal to retake the lead 17-14 with 3:57 left in the explosive opening quarter.

Woodville close out the quarter with one of their patented clock consuming drives with East Chambers leading 17-14. That lead was short lived. On the first play of the second quarter, the Eagles took to the air and Reese Shaw hit a narrow window on a 17 yard TD pass to senior Kemo Moran who made a great catch at the one yard line on the sideline against a Buccaneer defender and then made a great football move to get the ball inside the pylon to score and take the lead for good, 20-17 in favor of the Eagles. The PAT was no good, but the Eagles led for the first time in the game and didn’t look back.

Woodville led 34-17 by halftime and won the game 42-31 in a game that wasn’t as close as the score might indicate. Woodville finished the game with a whopping 511 total offensive yards. Zack Martin led the game with 22 carries for 223 yards 4 touchdowns and one interception in the second half to halt a drive by East Chambers. DaMichael Brooks had 21 carries for 143 yards and senior quarterback Reese Shaw had 7 carries for 39 yards with one rushing TD. Shaw was one for three in passing with the lone 17-yard touchdown pass to Moran.