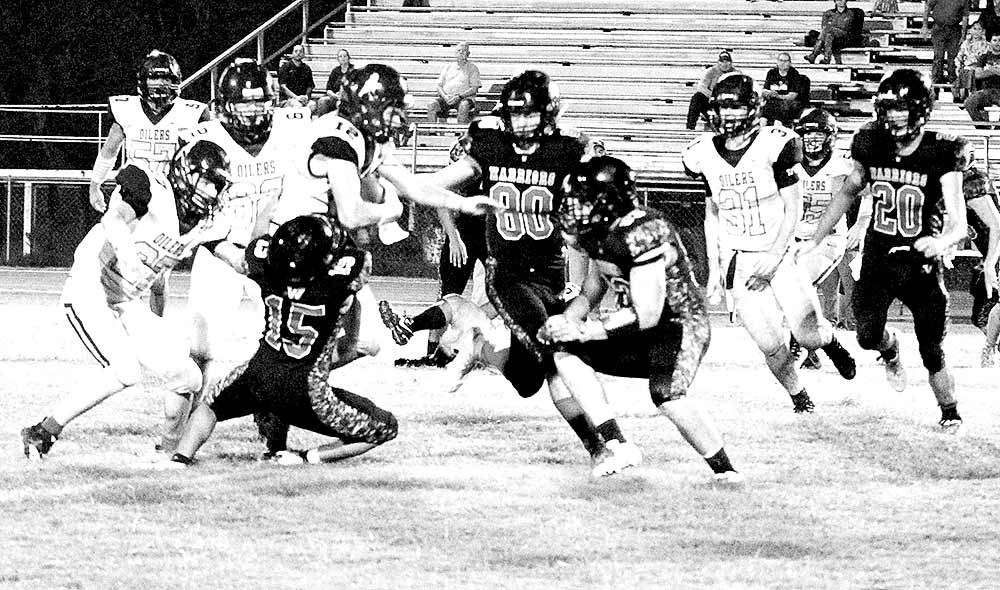 WARREN – The Warren Warriors football squad lost a heartbreaking 22-20 decision to the West Hardin Oilers last Friday night.
The evening started on a bright note for the Warriors as they took the opening kickoff back to their own 40. From there Warren marched 60 yards in nine plays, with Devon Hadnot covering the final eight yards for the touchdown. The conversion try was no good and Warren led 6-0.

Bowen Christie then came up with two key plays for the Warriors, one on offense, one on defense. Christie scooped up a West Hardin fumble at the Warren 35-yard line and returned it 31 yards to the Oilers 34. Three plays later on offense, Christie caught a 42-yard touchdown bomb from quarterback Bryce Herrington to put the Warriors up 12-0 with 1:17 left in the first quarter. The two-point conversion try was no good.

There was no scoring in the second quarter. Warren had a short drive stall at the West Hardin 48-yard line. With 1:06 left in the first half West Hardin drove to the Warren 33. On third down Warren threw the Oilers for a 10-yard loss and on fourth down a West Hardin pass fell incomplete. Warren then ran two plays to run out the first half and the Warriors led at the break 12-0.

West Hardin came out strong in the third quarter. On the first play from scrimmage the Oilers went straight up the middle with a 48-yard touchdown run to make it 12-6 Warren. The two-point conversion was no good.

Warren responded immediately. After returning the kickoff to their own 40, Devon Hadnot broke off a 13-yard run to the Oilers 47. After a five-yard loss on first down, Warren’s Bryce Herrington ripped off a 31-yard run down to the West Hardin 27. After a Warren personal foul penalty pushed the ball back to the West Hardin 43, Hadnot went 22 yards up the middle to the Oilers’ 21-yard line. After three plays netted eight yards for the Warriors, Hadnot ran around right end on fourth down and two for 10 yards to the West Hardin two to make it first and goal. From there quarterback Herrington took the quarterback sneak into the end zone for a 20-6 Warren lead. The two-point conversion was no good.

The Oilers converted the two-point conversion to make it 20-14. Devon Hadnot returned the ensuing kickoff to the West Hardin 33 as the third quarter ended.

Warren running back Luke Callaway took off on a 15-yard dash to the Warren 45. The Warriors’ possession stalled after that, and they punted to the West Hardin 33 with 3:19 left in the game.

With 1:31 left in the contest, West Hardin connected on a 46-yard pass to take the ball down to the Warren 6-yard line. From there, West Hardin scored from the 3-yard line on second down to tie the game at 20 with just :55 seconds left. The Oilers ran around right end for the 2-point conversion and their first lead of the night at 22-20.

From there, Warren recovered a squib-kick at their own 42-yard line. The Warriors were able to get off two more plays before time expired.

“A couple of items I was really happy with was that our passing game was 6-for-6 for over 100 yards and a touchdown. Also, we got off to a much better start against West Hardin than we did in our first two games. That was something we had really emphasized to the players the past few days.”

Buckner added, “We have the week off, so we’ll work on getting healthy. We’re down to 20 players and we had three players go down against West Hardin, but they should be alright with an extra week to heal. At practice the next couple of weeks we’re going to continue to get in better shape and we’re going to continue to improve on the little things.”