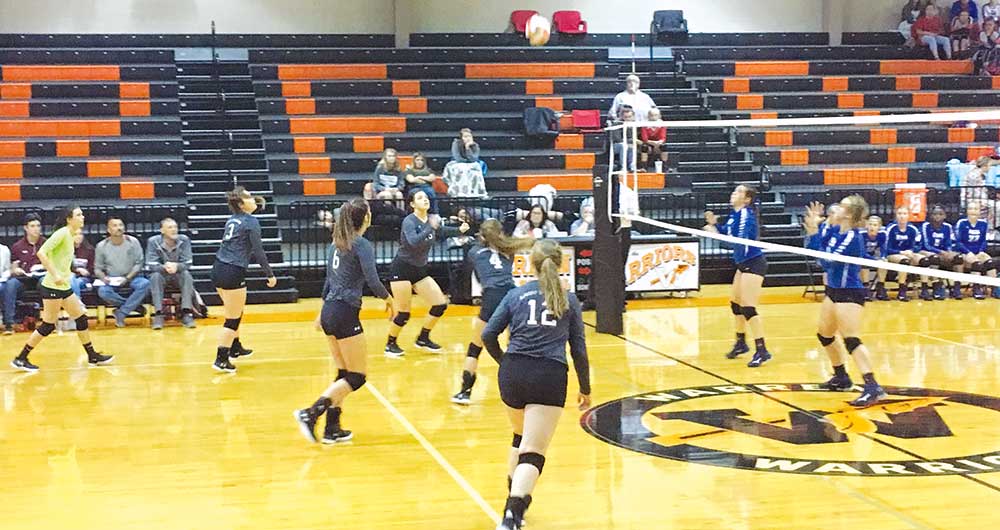 SPURGER – The Spurger Lady Pirates beat Whitehouse Homeschool in Nacogdoches on Aug. 21 in three sets. The Lady Pirates were originally scheduled to play Goodrich, but Goodrich cancelled the match, so Spurger coach Carrie Brinkley had to dig up an opponent for her team to play.

“We hadn’t played since August 14 versus Hemphill, so if we hadn’t gotten that match against Whitehouse Homeschool, we would have gone eleven days between matches. That would not have been good.”

Going into the Warren Tournament on August 23-25, Brinkley added, “The girls have been playing pretty well. Our practice habits are good and so far, we’ve been able to stay injury free this season. We did bring three junior varsity players up to the varsity for the Warren Tournament to get them some experience.”

At the Warren Tournament, Spurger played eventual tournament winner Buna in the first match of pool play last Friday. Buna beat the Lady Pirates 25-17, 25-15. The match started on a positive note for Spurger as they ran out to a 7-0 lead. Buna closed to within 11-8. Two key service errors and some defensive lapses put the Lady Pirates behind 14-13. Strong serving by Buna’s libero put them up 24-15 and Buna closed out the first set 25-17.

Spurger recovered to take their last two matches of the tournament. The Lady Pirates defeated former district rival Chester 25-19, 12-25, 15-7. Spurger then defeated Groveton in a rematch 26-24, 14-25, 15-9.
After the match against Whitehouse Homeschool and the Warren Tournament the Lady Pirates’ record now stands at 7-8 for the season.

Spurger played Good Samaritan School on Aug. 28 and play Chester at home on Friday August 31. Spurger opens district play the following Friday Sept. 7 against High Island. The two schools are very familiar with each other. Spurger beat High Island in the playoffs last season to advance to the regional tournament and the two schools played each other in a scrimmage on Aug. 3 before the regular season started.

Brinkley said, “They’re probably going to be our main competition in our new district. It should be a good match to open district play. We know each other well. We can’t wait to get started.”