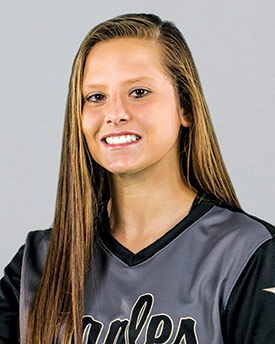 Woodville junior Kaitlyn Odom was named Defensive MVP of District 22-3A.WOODVILLE – District 22-3A has released the all district selections. This list is comprised of the players in from each community that showcased their talents and were recognized by the coaching staffs of all teams as the best in the district.

Woodville junior Kaitlyn Odom was the lone player named to one of the superlative list as she was named as the Defensive MVP of District 22-3A. Odom played shortstop for the Lady Eagles.

Joining Odom in the softball ranks is Kendal Wilroy. Wilroy was named as a first team all-district catcher. Key player Koral Sylestine was also selected as a first-team selection. Sylestine was selected by the district coaches as a utilty player for her power pitching in the circle as well as her quality of play at first base while anchoring Woodville's offense with her bat. Closing out the first team selections for Woodville softball were Sydney Smith and Alexis Ferguson, who were both named to the first team all-district roster as outfielders.

Rounding out the softballers were three that were added to the Honorable Mentions. Honorable Mention recognition was given to junior infielder Hallee Hughes and sophomores Kaya Merchant and Telia Jackson.

Baseball had a total of ten players named to the District 22-3A honor team. Leading the way for the Eagles was Cade Bass named as a first-team all-district selection as an infielder for his work at first base for the Eagles. Also named to the first team was Marcos Broom who was named as an outfielder.

Leading the way for the Second Team selections for the Eagles were David Whitehead, noted for his infield play all season.

Joining Whitehead with Second Team honors was Ty Bryant who was named as an outfielder. Reese Shaw was also selected to the Second Team from Woodville as a utility player. Shaw is known for his skills as a fielder as well as his contributions with his bat and his base speed. Truett McCollum rounds out the Second Teamers and was named for his tremendous work over the season in the infield.

Woodville had four others that were named as honorable mentions. Those players were Kaden Young, Garrett Allen, Reed Weaver and Wyatt Bell.