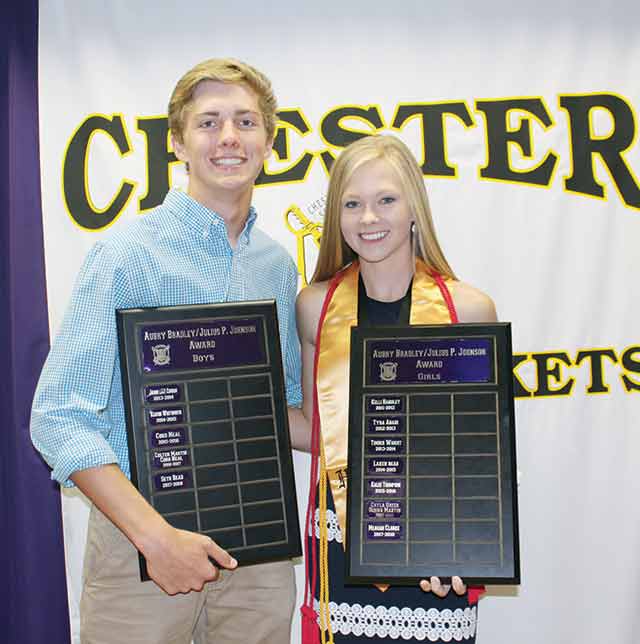 Last week, the athletes at Chester High School were recognized and honored during an awards ceremony.

The Aubry Bradley/Julius P. Johnson Award is the highest honor awarded to a Chester athlete. Athletes deserving of this award display leadership, hard work, athletic ability, academic ability, and competitiveness. These are all traits that Coach Bradley and Coach Johnson demanded from the athletes they coached. Every year, a female and male athlete is chosen for this honor. This year, the Aubry Bradley/Julius P. Johnson Award went to Seth Read and Meagan Clarke.

Coach Jeremy Wooten recognized the football team. This was a hard year for the Jackets, who played in one of the toughest districts in the state. Earning MVP honors this year was Seth Read.

DeWayne Armstrong took the podium to show nothing but praise for the volleyball team for another successful season. The team came just one game shy of a regional tournament appearance. The co-MVP's this season are Amory Parker and Meagan Clarke.

Coach Charlotte Barnes and the cross country team had a very successful season, advancing both the boys and girls teams to the regional meet. Dane Barnes once again advanced to the state meet, earning him the boys MVP honors. Annie Rayburn made history at CHS by being the first ever cross country athlete to medal at the regional meet, which also qualified her to advance to the state meet. Rayburn was named the girls MVP.

Coach Donald Mayhugh commended his Yellowjacket basketball team for their unwavering dedication and hard work. The team improved a great deal this season and Mayhugh said he is already excited about the future of the program. Seth Read was named MVP for this year.
Coach Wooten was excited to recognize the achievements made by the softball team. The girls advanced even farther than last year, and the future of the softball program looks promising. Wooten named Josey Sturrock as the seasons MVP.
T

he baseball team made it to the second round of the playoffs. Coach Tanner Neal recognized the efforts of the entire team. Seth Read received the MVP award.

The track teams were recognized for their hard work and grit displayed throughout the season. Most of the athletes advanced to the regional meet. Cade Parrish and Faith Loughner were both named as MVPs.

Armstrong and the tennis team also had a successful season. Most of the team advanced to the regional meet. Seth Read and Selah Spaulding received the MVP awards.