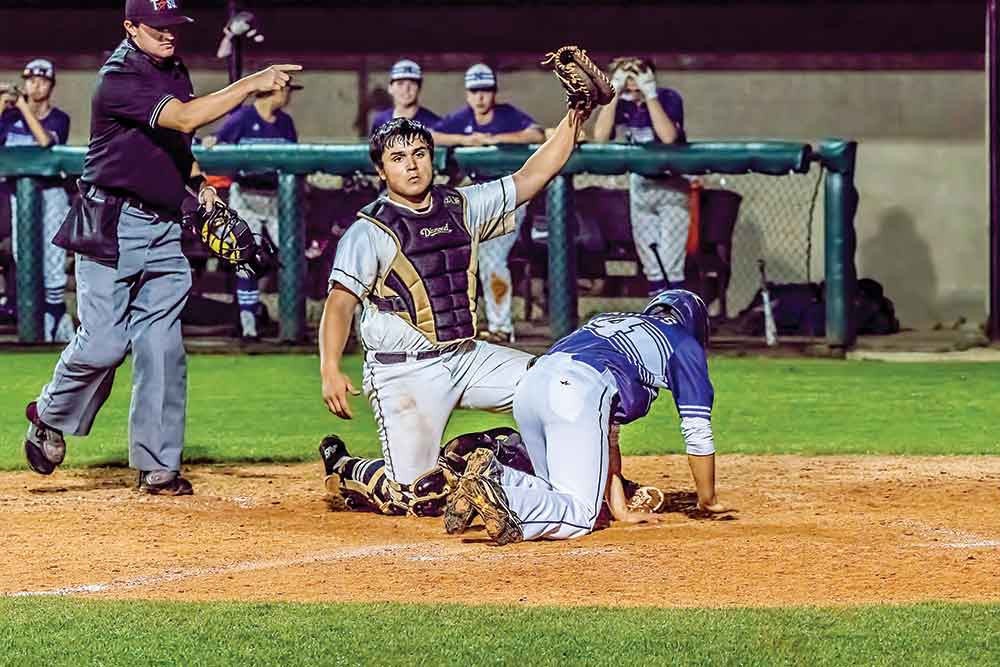 WOODVILLE—The Woodville boys' baseball team kickstarted a great week for Eagle athletics. The Eagles took down Newton on Senior Night last Tuesday to start a domino effect of success that bled over into softball and then the track and field programs.
The Eagles took on a tough traveling Newton squad in front of a full home crowd last Tuesday as seniors Cade Bass, Ty Bryant, David Whitehead and Reed Weaver were honored as a part of senior night prior to the game.

Bryant took the mound for the Eagles and got things started off right for the Eagles and sparked Woodville to and early lead after the first two innings. Newton got two runs in the first inning, but Woodville answered with four runs as Truett McCollum, Whitehead, Reese Shaw and Garrett Allen each crossed the plate in the second inning to give Woodville the early lead after two. The third inning saw McCollum come to the mound to relieve Bryant as Newton edged in on Woodville's lead. Newton added three runs in the third while the Eagles added two to keep a narrow 6-5 lead over Newton as the teams headed into the fourth.

McCollum continued to pitch solidly for the Eagles as Kaden Young added a run for insurance in the fourth to widen Woodville's lead to 7-5 after the fourth. Woodville then added two more runs as Bryant plated the sixth run for the Eagles to put them ahead 9-5 headed into the final inning.

Newton would not go away quietly and mounted a comeback and got two runs in the seventh inning that saw Young come on to relieve McCollum and close out the game. Newton managed to load the bases and give the Eagles one final test before Young finished off Newton for the Eagle team. It was a great win for Woodville, especially on senior night that started a week's worth of winning for Woodville.

The Lady Eagles were next on the docket as they began their post-season in a bi-district tilt against New Waverly. The Lady Eagles traveled to New Waverly for the first contest on Thursday and made short work of them as they took game one of a three game series 10-3. Some creative juggling of schedules saw Woodville host game two up in Robinson, near Waco to allow for girls who were also competing in the regional track meet at Waco Midway on Friday and Saturday. The Woodville took the early lead much like the boys, as New Waverly opened up the scoring in the first inning with a run only to see Woodville answer in the second with three runs. The contest was controlled for the majority of the game by the Lady Eagles until the final dramatic final inning that saw the Lady Dogs mount a furious comeback to take what seemed like a convincing lead after scoring five runs in the top of the seventh inning as New Waverly hoped to force a game three by taking a 6-3 lead over Woodville

The Lady Eagles had the last at bat and in the bottom of the seventh scored three runs to force extra innings. It was high drama in Waco as Woodville held New Waverly scoreless in the top of the eighth and got a run in the bottom to win and advance to the area round of playoffs. The Lady Eagles will face Danbury in a best of three game series. All games will be in New Caney and the first game will be at 6 p.m. Thursday with the second game scheduled for 6 p.m. Friday and the third game (if needed) will be played 30 minutes following. The winner will advance to the regional quarter-final playoff round and will face the winner of Corrigan/Buna.
Winning was clearly in the air for the Eagles athletic program and the winning continued over into the nearby regional track meet for Woodville. With state berths in Austin on the line, Woodville saw a little over two dozen athletes compete in the meet. Several made it out of the preliminary rounds to the finals and three athletes won events in the regional meet to advance to one of the premier state track and field meets in the country to be held in Austin. Tony Land continued to dominate in the hurdle events and won the 110's and took second in the 300's to advance in both. Land has the state's top time in the 110m hurdles and hopes to bring home a state gold for the Eagles.

Carrington Marendes has had a banner month, coming off of a national championship in wheelchair basketball and followed that up by winning all three wheelchair events, the shot put, the 100m and the 400m at the regional meet.

Like Land, Marendes holds the state's top time in the 400m and looks to be a lock for a gold. The only question for Marendes at this point is how many gold medals he can win at Austin. Not to be outdone by the boys, Jordyn Beaty will represent the Lady Eagles as she won the shot put and placed second in the discus to advance in both events. It's a statement to say that each of these three from Woodville will compete in multiple events at the state's highest level and continue to raise the bar for Eagle athletics.