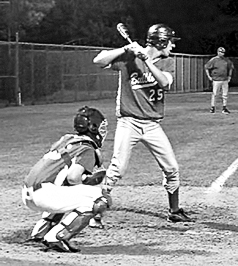 The Bulldogs got off to a hot start last Tuesday against Kountze, scoring three runs in the first inning, led by Senior Daniel Bruton's two-run double and Junior Bryce Rains' stand-up triple. The game was kept close throughout, with some consistent pitching and solid infield play from the Bulldogs. In the bottom of the seventh inning, the Bulldogs trailed 7-6. The first two batters that stepped up to the plate struck out, leaving Bryce Rains as the potential final out to seal a victory for the Lions. Rains then walked after five pitches and was able to steal second base, third base, and eventually home plate to send the Bulldogs into extra innings. Senior pitcher Cullen Barker took the mound to start the eighth inning, but was only able to get one out before being relieved by lefty Haiden Hughes. Hughes got the final two outs, putting the Bulldogs back on the plate with a chance to end the game. The Bulldogs couldn't find their rhythm swinging the bat, though, as none of the first three batters were able to get on base. In the ninth inning, things started going wrong for Colmesneil. The Bulldogs put themselves in a hole, surrendering four runs in the ninth, allowing Kountze to take an insurmountable 11-7 lead. The final score was 11-7. On top of the tough loss, the Bulldogs will be without starting first baseman Dylan Falcon for a few weeks due to a pulled hamstring suffered in the fifth inning. The Bulldogs also competed in the Evadale Tournament over the weekend. They finished in third place, beating Anahuac and Brookeland in the process. The Bulldogs will travel to Broaddus on Friday, March 9, at 6 p.m. to compete in their first district game of the season.

The Colmesneil Junior Varsity Bulldogs also played Kountze last Tuesday. Their start wasn't as good, though, as they fell into an 8-0 hole. The JV Bulldogs were on the verge of being shutout before scoring two runs in the second inning. After that slow start, the JV Bulldogs came alive. To start the bottom of the fifth and final inning, the JV Bulldogs trailed 8-2. Sophomore Tayler Walker started the comeback with a base hit on the first pitch. They were then able to hit their stride, as Sophomore Colton Grissom hit a two-run double, making the score 8-4. The JV Bulldogs seemed to be hitting everything that the Kountze pitcher threw to them, as they were able to make the final score an 8-8 tie after just five innings. The JV Bulldogs will travel to Broaddus on Friday, March 9, at 4 p.m. to play their first district game of the year.

The Colmesneil Lady Dogs traveled to Warren on Tuesday, February 28, to take on the Warriors. The game was close early on, with the Lady Dogs taking a 2-0 lead. The game then got out of hand, as errors and mistakes started to pile up. The Lady Dogs fell behind 3-2, then 8-2, with the final score being 12-2. They will try to rebound on Friday, March 9, at 6.p.m., as they travel to Broaddus to square off in a district contest.

Colmesneil's Varsity Track team traveled to Hull-Daisetta on Thursday, March 1, to compete in the Bobcat Relays. The Bulldogs performed well, led by several impressive achievements. In the boys division, Colton Ackley came in first place in the shot put and discus events. Sophomore Justin Fountain placed first in pole vault and Waylon Whitley finished fifth in the 300-meter hurdles. In the girls' division, Senior Jaymee Broussard had a spectacular day, finishing first in pole vault, first in the 100-meter hurdles, third in the long jump, and fourth in the high jump. Sophomore Nikki Noble also had a great day, finishing first in the 100-meter dash, and first in the 200-meter dash. Freshman Ashley Shultz finished third in the 3200-meter run, and sixth in the 1600-meter run. Junior Rose Smith finished third in the 1600-meter run, and Freshman Treasure Jackson finished fourth in the triple jump. The Bulldogs are hosting the Class A Classic on Saturday, March 10, in Colmesneil.