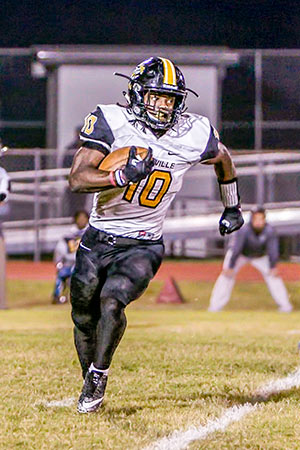 Mighty Eagle: Woodville’s Zack Martin (10) was named as a Unanimous MVP for the district in 2017. (Hale Hughes photo.)WOODVILLE—The Woodville Eagles had a stellar football season. Woodville stunned the district by gutting their opponents during district play by fairly large margins the whole season. As the season ended for District 11-3A, the coaches selected the All-District players and to no one's surprise, Coach Robinson's Eagles dominated this year's selections with a whopping 27 selections to the list.

Junior running back and safety Zack Martin was the unanimous pick for the district MVP. Zack is a two-way starter for the Eagles and amassed 1461 yards on 145 carries and had 18 touchdowns in the 2017 campaign.

"It's an honor to be named the MVP and this kid really deserves it," Coach Robinson said. "He has a great work ethic and has put in the work to get to where he is at."

The final superlative was given to Robinson, who was named as the Coach of the Year for the district after leading his team to a 10-2 record and back to back district championships.

Woodville was clearly known for its running game, but when the Eagles' looked to pass, they went to senior tight end Tyren Beatty, who was a standout at his position, both for blocking as well as dramatic receptions.

Sophomore Tyler Greer was named to the special teams as an All District kicker.

Rounding out the first team selections was junior Kobe Adams, who was named as the Utility Player of the Year for Woodville.

Woodville had only four players honored as second team All-District. Those players were freshman Jacory Hyder as a running back, sophomore Cade Gray as offensive guard, senior Jaylen Hyder as defensive end, and senior Mark Tucker as defensive tackle.

Congratulations to these young men who represented their team, their school, their families, as well as this community and Tyler County this year.