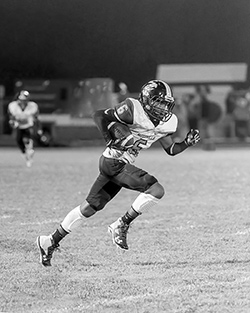 Moran on the Move:  Woodville’s Kemo Moran returns a kickoff for the Woodville Eagles. (Hale Hughes photo)Head football coach Ty Robinson took his team to Buna for a District 22-3A tilt against perennially tough Buna who seems to battle Woodville each year.

With the home field advantage, this year would prove no different.

It was Buna who drew first blood, scoring first against the visiting Eagles to give the Cougars an early 8-0 lead. The Buna defense was a challenge and the Eagles proved to be up to the task by answering with an 86-yard TD run by junior Zack Martin to bring the game close with the Cougars leading 8-7 at halftime.

It's not known what coach Robinson said in the dressing room to his squad during the break, but whatever it was, he should bottle it up and sell it.

The Eagles came out after halftime and simply took over the game. It was like watching two entirely different teams. The Cougars who had looked good for the first two quarters, now looked very beatable.

Conversely, the Eagles who looked equally good the first half, were simply sensational the final two quarters.

"We knew this was going to be a dogfight," Robinson said after the game. "It always is with them. This community has a lot of pride in their team and it shows. I have a great deal of respect for Buna and you just can't take them lightly."

Woodville would go on to score five second half touchdowns, spreading the ball all over to multiple ball carriers. Martin added another touchdown run in the second half to give him two touchdowns on the night, while senior fullback Reed Weaver added two touchdowns of his own to increase Woodville's lead. Junior quarterback Reese Shaw notched a touchdown and so did senior CJ Wooten.

Woodville's offensive power seemed too much for the Cougar defense the second half.

Woodville seemed to take the wind out of the Buna offense who just couldn't seem to get any momentum going like they had at the beginning of the game.

"Our kids really came out after halftime and responded," Robinson said. "We had a few breaks in the third quarter that helped us gain momentum and give us the upper hand."

When asked to elaborate, Robinson replied, "I think the key shift in the game was during Buna's first drive in the third quarter.
Linebacker Marcos Broom stripped the ball from their fullback and we recovered it. It seemed to ignite us and deflate them all at the same time."

Woodville won the game by a final margin of 43-14, once again having the Eagle offense flirting with 40-plus points for the fourth week in a row.

Lady Eagles tame Bulldogs
The Woodville Lady Eagles hosted rival Garrison Friday for Senior Night, honoring their 2019 seniors before the game. Seniors Sydney Smith, Alexis Ferguson and Josie Watts were recognized for their four years of effort and success by head coach Kaila Foster before a packed crowd at the Eagle Summit.
Yoselin & Lesli Miranda were also recognized before the home crowd as seniors for their efforts competing in cross country.
Woodville dominated Garrison from the first serve, taking down the visitors in straight sets 25-7, 25-7, 25-11.
It was a great win for the Lady Eagles and a sure momentum boost as the Lady Eagles take winning momentum into the playoffs as they prepare for the post season.