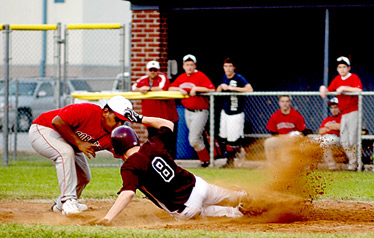 The Spurger Pirates Varsity baseball team competed in the Evadale tournament on March 1 and 2 and came away with two losses and one win for their first games of the season. The tournament started off with one game on Thursday against Evadale, which they lost 3-17. The second game began on Friday morning, and Spurger fell behind 0-6 against Anahuac. Although they lost the first two games of the season, the Pirates never forgot that they hadn't been playing or practicing baseball as long as most of the other teams in their district, and didn't let the losses get them down. In the third game of the tournament they played as a team to pull off a win against Hull Daisetta on Friday.

The top of the first inning, Hull Daisetta came out swinging and managed to score a 6 points before the Pirates could strike them out.

The game started out with Hunter Smith hitting a single, and stealing first and second base. Brett Bussel then hit a double that brought Smith into home for the first point for the Pirates Bussel managed to steal third base, but the follow up batters struck out at the plate, ending the first inning with a score of 1-6 with the Pirates behind.

Hull Daisetta hit two pop flies in the top of the second inning, and struck out swinging to make three outs and no score.

In the bottom of the second inning, John Smart hit a double, and then stole third base and home, bringing the score to 2-6. Caleb Lebouf and Thomas Martin struck out, but Austin Ross managed to run home during the last play of the game. At the beginning of the third inning, the score stood at 3-6.

Hull Daisetta struggled to make good hits in the top of the third, and got three outs after only four batters went up to the plate.

Laurent hit a single and stole second in the bottom of the third, and Cody Winkle hit him into home. The score was now 4-6 and Hull Daisetta were loosing their gap.

Hull came back in the top of the fourth and scored two more runs, widening the gap again to 4-8.

The, Hunter Smith hit a double and stole third in the bottom of the fourth inning, and Aaron Ford hit a double that ran Smith into home. Ford also made it home off of a hit by Laurent. During the last play of the game, Austin Ross hit a triple and stole home to bring the score to a close 7-8.

Since the game was a tournament game, it had a time limit and could only last two hours, so the teams could only play until the fifth inning. Hull Daisetta went up to bat one last time and managed to gain three runs. Those runs brought the score to 7-11, and it looked like the Pirates wouldn't be able to pull off a win. But, the boys came out in the bottom of the fifth inning ready to play, and fighting to take the win. Caleb Lebouf and Austin Ross both started off by making great hits and getting on base, and Thomas Martin stepped up to the plate and hit a perfect line drive to center field that brought Ross and Lebouf home and brought he score up to 9-11. Hunter Smith smashed a ball into left field and brought home Martin, stole 2nd base, and then got hit into home by Aaron Ford, tying the game at 11-11. The two hour time limit for the game was quickly coming to an end, and the only man on base was Aaron Ford, who stole all three bases and ran into home to win the game during the very last play of the game.

The boys were extremely happy that they came back and won the game, and are looking forward to the rest of the regular season, and games without time limits.

Be sure to catch the Pirates next game at home against High Island at 4:00p.m.