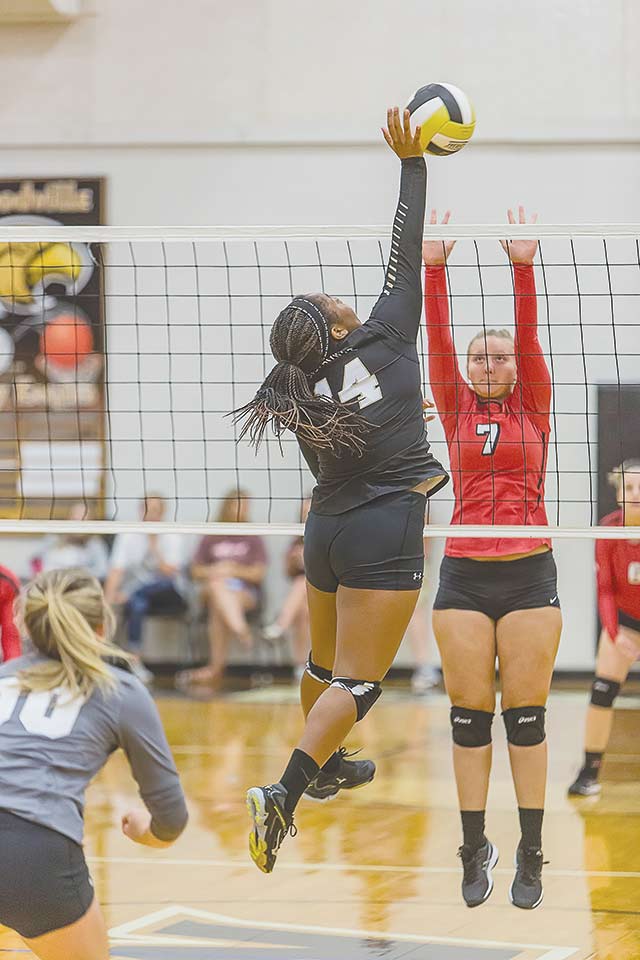 Keyonna Pairie gets some air as she spikes the ball past a defender in last weekend’s huge Woodville Tournament. (Hale Hughes photo)

Last weekend, Woodville hosted the largest preseason tournament in the area as 24 teams converged on the Summit to officially get the 2017 season underway. Pool games were held on Thursday, giving teams two games each to prepare for Saturday's tournament bracket play.
All three courts at the Summit were used and fans were shoulder to shoulder and stacked as much as three deep in some areas to see all the action that East Texas had to offer.

Teams classified from 2A-5A travelled from as far as Beaumont to compete in this massive tournament. Teams were divided into three brackets, gold, silver and bronze and played a best-of-three series for each match.

Brackets and teams were evenly matched as many of the games went to the third and decisive game to decide the winner. Woodville was no stranger to close games and had their fair share of competition.

Head coach Kaila Foster saw flashes of brilliant play from the Lady Eagles as they would rally hard to win points and showed real promise for the season ahead. However, being early preseason, she also saw some sloppy play and noted that her team was still a bit out of shape and conditioning was still an issue.

Foster's hometown Lady Eagles wasn't the only team to see disorder in their game and some coaches even took their teams out in the sweltering Saturday heat to have them run alongside the track to make up for erroneous execution during games on the courts.

Some fans were disgruntled by having to sit on the floor surrounding the courts in such close proximity to the action, but there was no denying that the atmosphere at Summit was electric. It was good business for Woodville as well. Concessions at the Summit were constantly busy and some teams gathered their players between games and bused them to local restaurants to feed them. It seemed there was as much action as the Summit could contain, until it couldn't contain it.

Shortly before 6 p.m., a transformer blew and left the Summit without power and in the dark.

Foster and girls' athletic director Troy Carrell scrambled to find a way to finish the tournament.