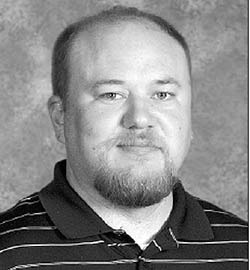 Donald Mayhugh has been named the new athletic director for Chester High School. Mayhugh was selected to replace Gary Beam, who left Chester after just one year in the position.

Mayhugh graduated from Texas A&M Commerce with a health education degree. He spent the last several years as the head coach for all boys sports at Martinsville High School.

Mayhugh is enthusiastic about becoming a Yellowjacket.

"I am excited about working with and assisting the different coaches on staff, as they have been very successful in the past," he said.

He hopes to learn a little from them and also help the other coaches any way he can. He is willing and ready to do whatever it takes to help all athletes at Chester to be successful.

He has held coaching jobs at small schools in the past and Mayhugh knows that one of the biggest hurdles will be sharing athletes with other sports. Sports and other school activities often overlap each other, and coaches must be flexible in scheduling practices and games that do not conflict with these other activities.

"I think that if you were to ask any coach this question, they would say their goal is to make the playoffs and win a championship," Mayhugh said.

He added that he feels both the boys and girls programs are in a good position and it is his goal — along with all the other coaches — to reach the playoffs in all the sports Chester High School participates in.

Mayhugh knows he is coming to a school that has had a pretty successful year all around in sports. The boys advanced past the district level in cross country, basketball, baseball, track, tennis, and golf. The girls advanced in volleyball, cross country, softball, track, and tennis. Mayhugh knows that several key contributors have graduated. He believes that it is important for the returning and incoming athletes to come back to school ready to take on bigger roles than they may have had in the last few years.

Mayhugh is already hard at work at Chester this summer and he is anxious to get started with his athletes this year.