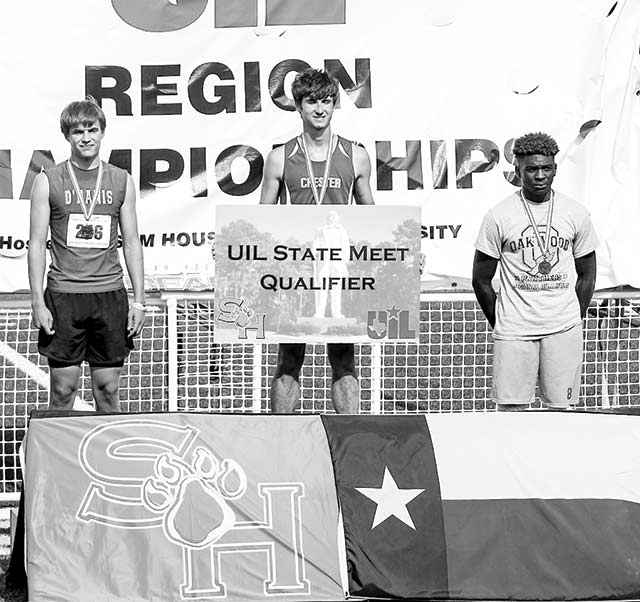 Cord Neal from Chester won the gold in the triple jump at the Region 4 track meet in Huntsville last weekend. Neal earned a trip to Austin to compete in the state meet on May 11-13.

Region IV Track and Field Meet was held April 28-29 in Huntsville on the Sam Houston State University campus. The Chester Yellowjackets were just one of the many teams competing.

Cord Neal secured a trip to state with a 43' 5" triple jump for the first place medal. Neal also placed fourth in the long jump. The boys 4x200M relay team of Colten Martin, Caleb Sittig, Michael Castleberry, and Jaqualin George finished in fourth place with a time of 1:37.94.
The boys 4x400M relay team of Neal, Martin, Castleberry, and George also placed fourth with a time of 3:40.15. Dane Barnes finished in fifth place in the 1600M run and seventh place in the 3200M run. Annie Rayburn finished fifth place in the 3200M run and ninth place in the 1600M run. Also competing for the Jackets were Amory Parker, Faith Loughner, and Danique Davis.

The Lady Jackets defeated the Zavalla Lady Eagles by a score of 13-10 on Monday, April 24. The Jackets took an early lead in the first inning, and kept hitting the ball. Zavalla got their bats going in the third inning to tie the score at 4-4. The Lady Jackets took the lead for good in the fourth inning as Ashlyn Overstreet doubled, driving in two runs. Belle Gilzow followed with a single, also driving in two runs. Gilzow pitched a good game for the Jackets, striking out six batters.

The Lady Jackets run ruled the Burkeville Lady Mustangs 15-0 in the first round of the playoffs on Tuesday, April 25. Donna Martin pitched a great game. Martin struck out four out of twelve batters faced, and allowed no hits. Hitting for the Jackets were Martin, Cowan, Spaulding, and Overstreet, with one hit apiece. Martin, Spaulding, and Overstreet also had two RBI's each. Coach Jeremy Wooten said this of his play-off run, "This team has made all of us proud. We are working hard and will be ready to battle."

The Lady Jackets will face the Kennard Lady Tigers in the regional quarterfinal round. The game will be Saturday, May 6 at 7 p.m. at the Groveton High School softball field.

The Chester boys baseball team played their final district game of the season on Wednesday, April 26 against the Zavalla Eagles. The Jackets defeated the Eagles 5-0. The senior players were honored just prior to the start of the game. Recognized were Cord Neal, Colten Martin, Clay Thomson, Junior Henson, and Cader Powell.

The Yellowjackets finished first in the 1A division of District 24. They will face either the Kennard Tigers or the Apple Springs Eagles. The Tigers and Eagles are currently tied and will play Tuesday, May 2. The Jackets are looking at a three game series early next week.