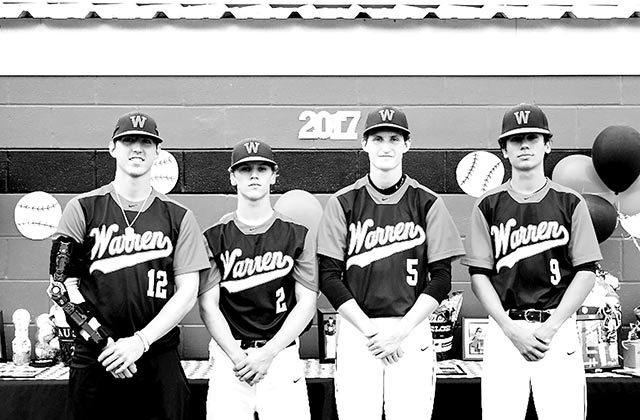 Kelby Weyler has played varsity baseball all four years in high school. As a freshman, he was voted Pitcher of the Year, Co-MVP his sophomore year, and First Team All-District his junior year. Weyler will be attending Rice University in the Fall on a baseball scholarship and will pursue a degree in Sports Management. Austin Scarborough played all four years in high school and will attend Lamar Institute of Technology for a degree in Instrumentation.

Ty Choate played baseball, basketball, and football all four years as well as being involved in Christians in Action for three years. Choate will attend Lamar University for a year before transferring to Texas A&M University to earn a degree in Sports Medicine. Hunter Welch enjoys baseball, hunting, fishing, and four-wheeling and will be attending Lamar Institute of Technology in the Fall to study Instrumentation. All of these young men thanked their parents as well as all of their teammates for making the last four years a memorable time for them.

The Warren baseball team had an interesting week as they attempted to make the fourth and final playoff spot. It was not looking good after a loss to Hardin on Tuesday by a score of 5-1. Refusing to give up on the season, the boys showed up big at Anahuac on Friday, taking this one 8-0; forcing a three-way tie for fourth place in the district race.

By way of a coin flip, Warren had to travel to East Chambers on Saturday, where they took on 60 mph winds to take a 9-2 win, earning the Warriors a final showdown with Kountze on Monday night.

On Monday, the Warriors jumped out to an early 2-0 lead over Kountze, but let the door open with a couple of errors that the Lions were able to take advantage of. The Warriors had runners on in nearly every inning as well, but came up short by a score of 5-4, ending their season.

Softball – After beating Kountze last week and earning a spot in the playoffs, the Lady Warriors hosted Kountze last Tuesday to see who would be the third and fourth seeds. The Lady Warriors were down 5-3 in the fourth inning when Marion Purvis and Laikyn Bell both earned walks to put two runners on. After a double steal, Rachel Lee hit a two out RBI single, scoring Purvis. Bailey Hamilton then hit the ball to the shortstop, who could not handle it, scoring Bell and Lee; giving Warren a 6-5 lead.

With two outs and the Lady Warriors up in the top of the seventh 9-8, Kountze tied the game at nine with a homerun to left field. Warren however would come back in the bottom of the frame.

Purvis led off with a single and then moved around to third base by way of a stolen base and wild pitch. With two outs, Hallie Nevins slapped the ball to third. Kountze's third baseman bobbled the ball just enough for Nevins to make it to first base and hand the Lady Warriors a walk-off win with Purvis scoring from third. The win gave the Lady Warriors the third seed going into the game against Rice Consolidated of Altair on Thursday night in Centerville.

Warren started out well in this bi-district matchup, taking a 1-0 lead when Hamilton scored Bell from third on a fielder's choice. Rice took the 3-1 lead in the second inning, but the Lady Warriors tied the game at three in the top of the third inning with timely hits by Hamilton and Emily Cloud and a little help by Rice with a couple of errors. Rice, however, would continue to score in the fourth through sixth innings and close out the Lady Warriors season 11-4.