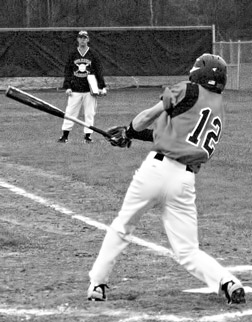 The Warren Varsity baseball team competed against the Burkeville Mustangs in an impressive home game on February 27. Prior to the game, the Warriors had a season record of 4 wins and one loss.

The Warriors started in the field with Gage Gresham pitching and Chase Foxworth catching. Gresham walked one player, struck out one, and pitched hits to two players. Shortstop Bryce Glosson put two of the outs for the team before Gresham struck the last player out. The Warriors then were up to bat. The Burkeville pitcher walked a total of 7 players and provided hits to 4. Dylan Watts was walked on the bases and stole second, third, and home to give the Warriors their first point. Kyle Adams was also sent home from a hit by Brandon Choate. The first inning ended with Warren in the lead at 6-1.

The home team returned to fielding, where Gresham struck out two batters, and Foxworth supplied the final out for the Mustangs. Austin Philips came up to bat, but was walked by the pitcher. He then made his way around the bases before coming in for a point. Adams knocked out a hit, but was quickly halted at the first base. With a caught pop fly from Chase Gray, the second inning came to a close with the score at 7-1. The Mustangs' batting in the third inning was brief, as Gresham demonstrated his skill by striking out the first three batters. The Warriors saw more success as Watts and Foxworth both had hits. Foxworth hit in Dylan Brocato, putting the score at 8-1, ending the third inning.

Burkeville had two players walked and one hit in the fourth inning. Despite their ability to get on the bases, they were quickly put out by Warren players. The Warriors had two players hit, starting with Philips who launched out a pop fly caught by an opponent. Adams then made up for the out and swung in a double; however, nobody made it to the home plate within the fourth inning. The fifth inning started with Adams now working as the pitcher. He pitched admirably, throwing one hit and striking out three. Watts came up to bat and slammed in a triple, bringing in Brocato. Glosson and Philips also hit in two more points before the game came to a close, the Warriors being ten points ahead of Burkeville with the score at 11-1.