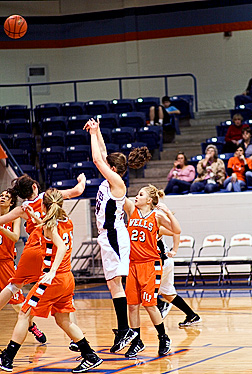 After a fun and sometimes difficult basketball season, the Spurger Lady Pirates played their last official game on Thursday, February 14 at Angelina College in Nacogdoches. The team played Well's in their first playoff game of the year, and fell behind 22-54. The girls played long and hard, and truly gave it their best shot against Wells, but couldn't hit the shots they needed to bring up the score. Notable players in the game were Kaitlyn Willis with 6 points and McKenzie McGallion with 5 points. The girls had a great season and are already looking forward to making it into the playoffs next year.

The boy's team on the other hand will start warming up for their district playoffs Friday, February 17 when they play Evadale in Spurger. The warm-up game doesn't hold any weight in district playoffs, but provides the boys practice for facing other teams and fills in a week that would otherwise not have a game scheduled. An official playoff game, opponent or location has been scheduled for Spurger but they expect to have a bracket for playoffs early next week.