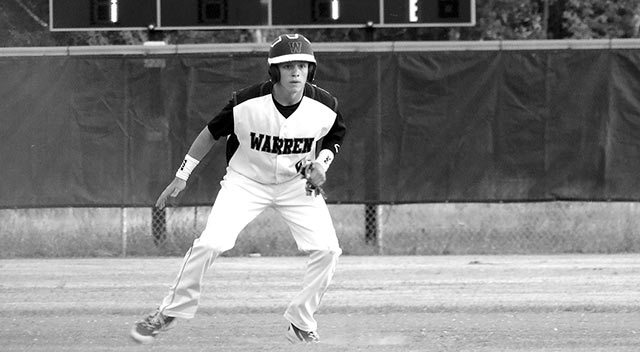 Connor Fry takes a lead-off in the game against Woodville. (Katie McCluskey photo)

On Tuesday, April 22, the Warren varsity baseball team played Woodville at home. This was the Warriors last district game before play offs. The starting lineup included Brandon Choate in center field, Tate Gore catching, Kelby Weyler at short stop, Kyle Hathaway pitching, Cody Carden at first base, Justin Stewart at second base, Connor Fry in left field, Justin Phillips at third base, and Rian Oquin in right field. In the first inning Gore threw a runner out attempting to steal second base and Hathaway struck two batters out, but Woodville was still able to score two runs. The Warriors managed to get on base, but were unable to score. At the end of the first inning the score was 2-0. In the second inning the Warriors switched to Choate pitching.

Choate fielded a bunt and got the out at one. Weyler caught a pop fly at short stop and Phillips fielded and threw the ball to first base for the second and third outs. Neither Woodville nor Warren scored this inning. William Pelt caught a ball in center field for an out, Choate struck a batter out, and Stewart fielded and threw the ball to first base. Woodville again scored two runs. The Warriors went into the fifth inning still behind 4-0. Weyler made a great double play at first and second base and Choate struck another batter out. Woodville scored another run however, extending the Eagles lead 5-0. In the sixth inning Fry caught a ball in left field, Choate stuck a batter out, and Weyler caught a pop fly for three quick outs. Fry hit a pop fly which was dropped, making the hit a single. Pelt then had a great hit to right field which advanced Fry to third base and Pelt to second. Choate also hit the ball which scored the first and only run of the inning for the Warriors.

At the end of the fifth inning the Warriors were losing 5-1. Phillips, Stewart, and Weyler got all three outs by fielding the ball and throwing to first base in the sixth inning. Gore and Weyler were walked back to back. Hathaway hit a fly ball which was the first out. Carden had an excellent hit to left field which scored a run. Stewart was walked with bases loaded, Weyler scored. Fry hit the ball for and RBI and was safe at first base, but the runner on second base was called out. Phillips hit also which scored another run. Pelt was walked. Choate hit the ball, scoring a run for the Warriors. Gore was walked. Weyler had an excellent triple with bases loaded that was hit between center and right field. This hit scored three more runs. Hathaway then hit a pop fly for the last out. The Warriors took the lead 9-5 through a fantastic inning. In the last inning of the game Weyler caught a pop fly and Choate struck two more batters out.