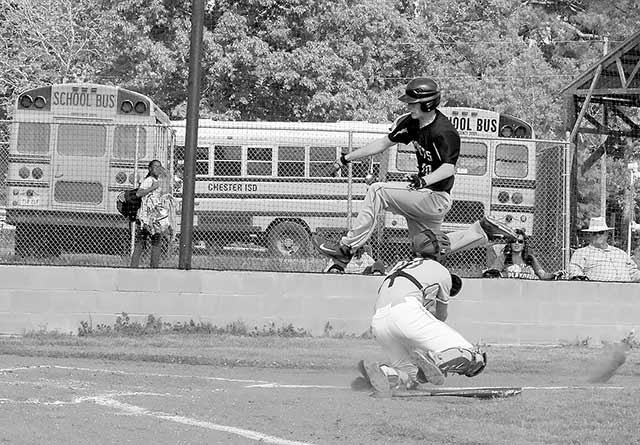 Billy Thompson uses his athletic ability to jump the catcher and score for the Jackets. (Wendy Whitworth photo)

The District 25A/26A Division II Area Track meet was held Wednesday, April 16 at Abe Martin Stadium in Lufkin. There were 14 schools competing and the athleticism was intense, but this did not stop the Lady Jacket and Yellowjacket track teams from having a very successful day. The Lady Jackets took first over all to make them area champs and the Yellowjackets placed fourth. Several of the track athletes placed in the top four to advance to the regional track meet on April 24 and 25 in Kingsville, Texas. Placing first in their events were: Tyra Adair in the 100m dash, 200m dash, and 400m dash, and Billy Thompson in the pole vault. Second place was awarded to Kyrstin Jobe in the 800m run and 1600m run, Tyra Adair in the long jump and Kalee Thomson in the 3200m run. Finishing in third place: Keaton Whitworth in the 200m dash, Cord Neal in the discus, Kalee Thomson in the 1600m run, Thompson, Whitworth, Neal and Colten Martin in the 4X400 relay, and Destiny Kuehn, Kylee Thomson, Laken Read and Jobe in the 4X400 relay. Placing fourth were: Neal in the triple jump, Donna Martin in the 800m run, Read in the shot put, and Adair in the triple jump. Fifth place went to Kris Kuehn, Whitworth, Thompson, and Martin in the 4X100 relay and Martin in the 1600m run. Finishing in sixth place was Neal in the 800m run.

Yellowjacket Baseball
The Yellowjackets took a stunning 12-5 win over the Brookeland Wildcats Tuesday, April 15. The Wildcats took a two run lead in the first inning. The Yellowjackets quickly halted their scoring attempt with a ground out at short stop, an out at home and at second. The Yellowjackets took control of the game with an RBI double by Keaton Whitworth to plate Cord Neal and Kris Kuehn. An error on the play brought in Billy Thompson. Levi Watts hit an RBI single to score Whitworth. Three Brookeland errors in the second inning allowed Kuehn, Thompson and Whitworth to cross home plate. A Yellowjacket error in the third inning allowed Brookeland to score two, but this was no threat to Chester. The Jackets racked up four runs in the fourth inning. Two hit by pitch, a balk and an RBI single by Neal pushed home Watts, Colten Martin, Bailey Goins and John Proctor. The fifth inning brought in one run for each team. Both teams held tough in the sixth and seventh innings to close the game.

The Yellowjackets were able to muster up four hits, but could not push enough runs across and lost to the Zavalla Eagles 9-1 Friday, April 18. Thompson scored the only run of the game for the Yellowjackets in the first inning on an RBI double by Whitworth.

Golf
Bailey Goins and Clay Thomson played in the District golf tournament held at the Neches Pines Golf Course in Diboll. Goins placed first and Thomson took third. Goins advanced to the regional tournament held at the Piney Woods golf course in Nacogdoches where he shot a 94 in round one and a 92 in round two for a combined score of 186. He placed fourth among the individuals.

Lady Jacket Softball
The Lady Jackets took a 10-7 win over Brookeland on Tuesday, April 15. The Lady Jackets came through with a big 5th inning to push them over the top in the game against Brookeland. This was capped off by a Kyrstin Jobe inside the park home run. The game ended with the Lady Jackets turning an unconventional double play. "It was great to get this win, we felt like we should have beat this team the first time around and for us to come back and play with this kind of confidence was great," commented Chris Fudge.

The Lady Jackets fell to Zavalla 6 – 3 Friday, April 18. The Lady Jacket defense had one bad inning. Timber Wright had two quick innings allowing only one base runner, but Zavalla opened up the doors in the third inning and scored six runs. Relief pitcher, Kuehn was having trouble finding her rhythm, before Martin came in with one out in the third and struck out the first batter that she saw and got the second batter to ground out to third base. Martin went on to pitch a wonderful game allowing only one base runner in the fourth inning, two in the fifth, and one in the seventh, completing four and two-thirds shutout innings. Martin finished the night with five strikeouts with only one walk. In the first inning the Lady Jackets had runners on second and third base before a couple of strike outs ended the opportunity. In the third inning, the Lady Jackets got a runner to second base twice, but were unable to score. The Lady Jacket offense was able to score their only three runs in the fourth inning. Stat leaders against Zavalla were: Jobe reached base three out of four times and scored one run, Read reached base two out of three times, scored one run, and Wright and Read had the only two stolen bases. "Tonight we turned the light off on some terrific careers. Heather Choate, Kyrstin Jobe, Alexis Washington, Timber Wright, and Tyra Adair have all had amazing careers at Chester ISD and they will be missed. We gave the number one team in our district a run for their money and had our opportunities but were unable to capitalize on them. I appreciate these girls, Coach Barnes, and the community for coming out and supporting this team. These girls did a great job throughout the season and their hard work and dedication did not go unnoticed," commented Coach Chris Fudge.