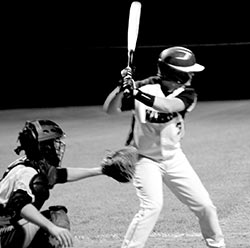 On Friday, April 18, the JV and varsity Lady Warriors traveled to Deweyville to play their last game of the season. The JV Lady Warriors played an excellent last game as they dominated Deweyville 14-2. The varsity Lady Warriors fought hard in their last game, but lost 15-0. The Lady Warriors played well throughout their entire season and hope to have an even better season next year.
On Tuesday, April 15, the varsity Warriors played at home against Kirbyville. The Warriors had a great game but fell short 3-1. The starters for the Warriors included Brandon Choate pitching, Tate Gore catching, Kelby Weyler playing short stop, Justin Phillips at third base, Cody Carden at first base, Justin Stewart at second base, Connor Fry playing left field, William Pelt playing center field, and Rian O'quinn playing right field.

In the first inning Stewart got an out by fielding and throwing the ball to first base. Weyler and Carden worked together to get a runner attempting to steal second out. Gore hustled to catch a foul ball for the third out. The Warriors were unable to score, although Gore did get on base. In the second inning Choate got the first out for Warren by fielding and throwing the ball to first base. Weyler caught a hard line drive. Stewart got the third out of the inning by catching a pop fly. Kyle Hathaway, batting for Phillips, was walked and then advanced to second when Carden bunted. In the third inning Carden caught a foul ball. Kirbyville scored the first run of the game. Gore threw a runner out attempting to steal third base.

Choate struck a batter out for the last out. Warren had a scoreless inning. Phillips got an out for the Warriors by fielding and throwing the ball to first base. Pelt caught a pop fly for Warren. Choate had another strike out for the last out. The Warriors were unable to score again. In the fifth inning Phillips again fielded and threw the ball to first base for an out. Weyler then caught two pop flies. Fry was walked and then advanced to second when Pelt bunted. Warren finished the inning scoreless.

Stewart caught a pop fly for the first out. Choate struck another batter out and caught a pop fly as well. Warren was unable to score. In the seventh inning Choate struck two more batters out and O'quinn caught a pop fly. The Warriors strived to score and come back from losing 1-0. Stewart had an excellent single hit over second base. Layton Vonberg then ran for Stewart. Vonberg stole two bases when the Kirbyville pitcher overthrew first base. Vonberg stole home on a past ball to score. The Warriors were now tied with Kirbyville 1-1. In the eighth inning Kirbyville hit a homerun with a runner on base. Choate fielded the ball and threw to first base for an out. Phillips caught a line drive. Stewart got the final out by catching a pop fly. The Warriors were unable to score in this last inning. The final score was 3-1.

On Friday, April 18, the varsity Warriors traveled to Corrigan. The Warriors played yet another great game, and were able to earn another win 8-4. The Warriors will be advancing to playoffs due to their hard work and excellence throughout the season.

The tennis teams competed at their district tournament on April 2. Mark Blackshear won first place in the boys singles and Kaelin Miller won second place in girls singles. Both advanced to regionals. The regional competition took place on April 16 and 17 in Tyler. Blackshear earned third place at regionals.

The Lady Warriors will be hosting a ragball tournament on Saturday, May 3, as a fundraiser for the softball program. The fee is $20 a person. Teams may have up to twelve people. Forms are due on Thursday, May 1.