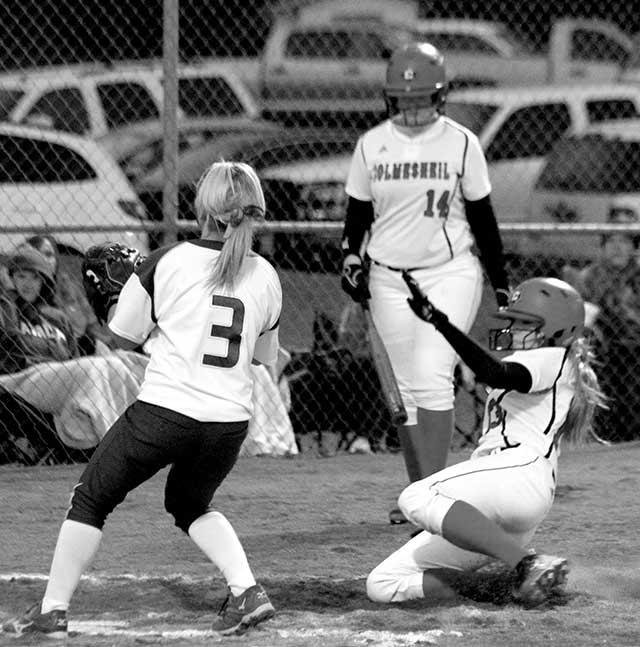 Kara Standley sliding into home plate for what would end up being the winning run in the Lady Dogs 4-3 victory over the Lady Eagles of Zavalla. (Colmesneil Yearbook Staff photo)

Varsity Softball
The Lady Dogs continued their strong district play this week as they improved to 2-1 in district. They started the week off by run-ruling Brookeland 16-0 in a huge road win. Kara Standley picked up another victory as she continues her stellar senior campaign on the mound. Freshman Krista Harris blasted her first high school homerun during this game as well, as she knocked a two run shot over the centerfield wall.

On Friday, the Lady Dogs took on a very strong opponent in the Lady Eagles of Zavalla. Zavalla managed to take a 1-0 lead in the first inning of the game. Colmesneil struggled at the plate the first few innings of the game as they had a hard time with the Zavalla pitcher. Zavalla added to their lead in the third inning as they managed to get two runners across home plate and take a 3-0 lead. But, in the fifth inning the Lady Dogs finally broke through. Kim Knighten started the inning off with a single and from there everything just fell into place. Alicyn Mitcham and Destiney Kirkindoll laid down beautiful bunts which moved runners and they reached base as well. Then with two outs and the bases loaded Kara Standley smacked a two run double to pull Colmesneil within one 3-2. Magen Allen reached on an error, which allowed for the tying run to score and Standley to move to third. A few moments later, the Zavalla catcher allowed a pitch to get by her and Standley seizing the opportunity stole home plate to put Colmesneil up 4-3. The Lady Dogs held Zavalla at bay the rest of the game and were victorious 4-3 with Kara Standley picking up the win.

Varsity Baseball
The Colmesneil Varsity Baseball Tournament took place this past Thursday through Saturday and there was lots of great baseball action. Some of the scores from the tournament were Groveton defeated Evadale 4-3, Woodville defeated Douglass 1-0, Harleton beat Hemphill 10-9, West Sabine defeated Corrigan 6-3, Woodville downed Groveton 8-7, and Evadale defeated Harleton 7-5. There were a number of other exciting games that took place throughout the weekend.
During the tournament the Bulldogs took on some tough competition and gained some valuable experience as they gear up for the start of district play. In their first game they took on the Diboll JV. Kaleb Lindsey got the call and pitched a great game as he went four innings giving up no runs and only allowed two hits in picking up the win as Colmesneil won 9-0. Mason Williams also pitched an inning of relief holding Diboll hitless. Offensively, Zach Bryan led the attack knocking in two runs. Also, contributing were Dylan Falcon who picked up an RBI and Kaleb Lindsey crossed home plate three times.

In their second game of the tournament Colmesneil took on their neighbor to the south, Woodville in a much anticipated game. The game unfortunately did not go the way Colmesneil had hoped as they dropped the game 9-2.

On Saturday, the Bulldogs took on a tough Huntington team. Huntington jumped on Colmesneil early grabbing a 9-0 lead. But, Colmesneil did not give up. The Bulldogs settled down and dug their heels in and battled back tying the game up 9-9. Both teams continued battling and when the game was called due to the tournament time limit they had battled to an 11-11 tie. Zach Bryan again paced the Bulldog offense going 3 for 3 with four RBI's. Chris Thedford hit a missile out of the park for a two run bomb, his first of the young season. He also went 2 for 2 on the day. Jake Pattillo came in relief and pitched 4 1/3 innings, striking out two and only allowing two earned runs.