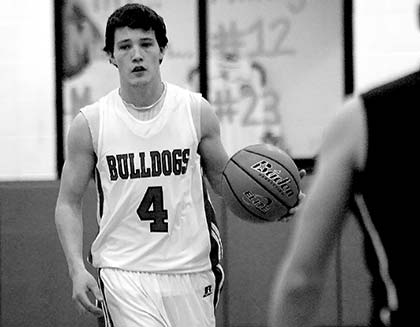 Bulldogs snap play-off drought with win over Hull-Daisetta
With a victory Friday night over the Bobcats of Hull-Daisetta the Bulldogs would snap a play-off drought in boys' basketball that traces back 20 years. And win they did by overcoming a 13 point deficit to pull off an exciting 57-46 victory.

The game started slowly for both teams as they tried to get into a rhythm. Colmesneil took the early lead jumping out to a 5-1 lead. But, the Bobcats would soon get into their own rhythm as it seemed everything they threw anywhere near the basket found its way in. This helped Hull-Daisetta erase that early deficit and jump out to a 17-7 lead at the end of the first quarter.

The hot shooting of Hull-Daisetta continued into the beginning of the second quarter as they extended their lead to 20-7. At this point the Bulldogs could have checked out and gone through the motions, but they showed heart as they began chipping away at the Bobcat lead one basket at a time. Tyler Walker who struggled during the first period finding his shot, found it in a big way in the second quarter as he scored eight of his 13 points during the Bulldog comeback. Cole Lowery was a monster down low controlling the boards and coming up with some huge offensive rebounds. Just as quickly as Hull-Daisetta got hot, they went stone cold. The Bulldogs made a defensive adjustment to neutralize the Bobcats leading scorer and it shifted the tide Colmesneil's way as they outscored Hull-Daisetta 16-7 in the second to go into halftime only trailing by one, 24-23.
After halftime, the two teams traded baskets with neither team being able to separate from the other and gain a comfortable lead. But, Colmesneil was able to take their first lead since early in the first quarter as they ended the third period up 36-34. From a fan's perspective you could sense the wind going out of Hull-Daisetta's sail.

There was a sense of determination from the Bulldogs as they started the fourth quarter. They were not going to be denied a trip to the play-offs. Much like the Bobcats were on fire in the first quarter the Bulldogs caught fire in the fourth. Matt Bailey drained two of his four three-pointers on the night in the fourth. Kolton Bass hit two huge three-pointers that were like daggers in the Bobcats hopes of coming back and Lowery muscled in six of his team high 15 points in the fourth period. When the final buzzer sounded the Bulldogs had taken a 57-46 victory over Hull-Daisetta and made a date on Monday night with the losing team of the West Sabine versus San Augustine game that was also being played Friday night to determine the top seed out of their district as those two teams tied for first. "It was a good team effort. We shot the ball well from the three point line in the fourth quarter. Cole was a monster on the boards and in the paint. And Kolton and Tayler were unsung heroes tonight," Coach Clint Stephens said.

Along with Lowery's 15 points, Bailey had 13, Tyler Walker also had 13, Tayler Walker chipped in four, Bass had six, and Dylan Falcon had six points as well.

Colmesneil Youth Basketball
This year the Colmesneil Basketball Association joined up with the Backwoods Basketball League. Along with Colmesneil the league consists of the communities of Zavalla, Etoile, Brookeland, Broaddus, Chireno, and Pineland. This year 90 young athletes from the ages of 4-14 represented the Bulldogs and Lady Dogs competing on the hardwood in this tough league. It has been a great year for these athletes and the coaches who have helped coach them. Every Saturday starting in January these young athletes have traveled to compete and the growth they have shown has been tremendous. Their seasons will be winding down with end of the season tournaments for each age group the last two weekends of February. The Colmesneil Basketball Association would like to thank the coaches who volunteered their time each week helping these athletes learn the game of basketball. They would also like to thank the parents for getting them to practice and games. And they would like to thank the players themselves for giving it everything they had every game. This year was a tremendous success and they expect next year to be even better.