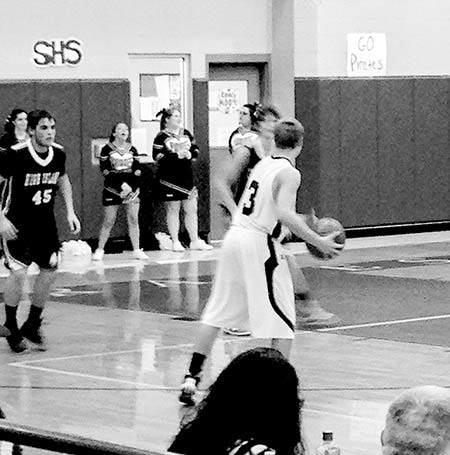 Tuesday, February 10, the Spurger Pirates and Lady Pirates traveled to Chester for another district game, as well as the girl's final game of the season. Although the girls faced a tough loss, they all played well and the seniors played an exceptional last game. The boys on the other hand triumphed against the Yellow Jackets on their endeavor to the playoffs.

The boys started out slow in the first quarter, which gave the stands quite the anxiety. It wasn't long before they chose to kick it into gear and leave Chester behind. By the time the half rolled around, Spurger was up 36-19. For the half, Caleb Winkle managed 10 points, Pilgreen scored seven, and Sheffield made five. Other players contributing to the lead were Clark with four, Cody Winkle scored three on an and-one drive, and Ross made a two-point jumper. The Pirates never slacked off coming out of the second half, and allowed themselves to let more of the second string play. By the end of the game, nearly all the players were able to contribute to the win, whether it was scoring, stealing, or rebounding. Caleb Winkle finished the game as the top scorer with 17 points. He also had two rebounds and two steals. Pilgreen led the team in both offensive and defensive rebounds combined with nine rebounds. Pilgreen was also one of the lead scorers with 13 points, as well as three steals. Sheffield had the most blocks and steals with four steals and two blocks for the Pirates. Sheffield also put seven points on the board and got eight rebounds. Clark stepped up his game and added in eight points, two steals and a defensive rebound. Hyden grabbed three rebounds and put up five points, and Ross followed with four points, and one rebound. Although Cody Winkle did not score as much as he usually does, with three points, he managed four rebounds, and three steals. Caleb LeBouef played as a strong defensive player with rebounds and steals, and a free throw. Lane hit a three pointer in the fourth quarter to earn points for the Pirates and Jordan hit two free throws. The Pirates came away with a victory of 63-38.

The Lady Pirates did not manage the win, but the seniors, E.Shumake and McLeod played outstanding to finish their high school career. McLeod reached one of her season highs of 12 rebounds off the boards, and took away four steals from the Yellow Jackets. Off of one of her offensive rebounds, she was able to make a two-point put back. E.Shumake grabbed four rebounds, and swiped three steals. Shumake also hit a three-pointer early in the game. The other girls also fought hard despite the loss. J.Shumake scored the most for the ladies with nine points, and she also had two rebounds. Wood followed behind her with eight points, two rebounds, but she also managed a steal. Both LeBouef and Vivian fought and retrieved two rebounds each in Spurger's favor. The girls had a well played season with such a young team, and look to do great things in the seasons to come.

The Spurger Pirates varsity boys will be participating in this year's playoffs, and games will be announced.