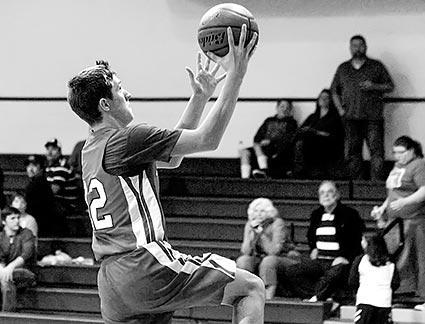 Matt Bailey driving in for two of his 12 points in the Bulldogs victory over West Hardin 57-44. (Colmesneil Yearbook Staff photo)by Michael Patrick

Boys Varsity Basketball
The Bulldogs traveled to Saratoga to take on the Oilers of West Hardin on Friday night to open up district play. The Oilers opened the game by pressing the Bulldogs and the Dogs struggled to get into a rhythm offensively falling behind 11-6 at the end of the first quarter. During the second quarter the Bulldogs turned their defensive intensity up a few notches as Chris Carr and Jermany Wooten flustered West Hardin with some hard-nosed defense. Taylor Walker and Cole Lowery started to heat up as well and get into a nice rhythm, combining to score 13 of the Bulldogs 17 points in the quarter. This offensive explosion helped the Bulldogs take a 23-19 lead into halftime, with the final three points coming on a Lowery three-pointer at the buzzer.

The Bulldogs could not shake the Oilers during the third quarter as West Hardin matched Colmesneil basket for basket throughout the period. At the end of the third quarter the Bulldogs held a slim 37-34 lead. The two teams came out for the fourth quarter ready to go toe to toe and battle it out. The fourth quarter was back and forth with the Bulldogs answering each of the Oilers charges. But, as the game wore on the Bulldogs stood their ground and were determined to not let West Hardin steal a win. Hayden Langston drove in and made an acrobatic lay-up that got the Bulldogs fired up and looking for more. Kolton Bass continued the momentum swing into Colmesneil's favor by hitting a clutch three-pointer in transition. Matt Bailey also got hot late scoring 10 of his 12 points in the fourth quarter. The Bulldogs wore the Oilers down and were able to come away with a 57-44 win to open their district season and improve to 10-4 on the year. Coach Allen of West Hardin was impressed with Colmesneil's shooting ability and overall physical strength after the game. Lowery led the Bulldogs with 20 points on the night. Also contributing to the scoring were Tyler Walker with eight points, Taylor Walker with six points, Bass with five points, and Wooten, Carr, and Hayden all chipped in two points apiece.

Last Tuesday, the Bulldogs traveled to Lufkin to take on Crimson Academy. The Bulldogs struggled early in this game, but the cream rose to the top as the Bulldogs took a 68-54 victory. Colmesneil set a school record by making 12 three-pointers during the game, led by Bailey making six of them. Bailey led all scorers with 25 points in the win. Also, getting in the scorebook were Lowery with 11 points, Taylor Walker had nine points on 3-5 shooting from behind the arc, Dylan Falcon had nine points, Bass had six, Tyler Walker six points, and Langston chipped in two. Lowery had a double-double with 11 rebounds going with his double digit scoring effort. Falcon had five steals and Tyler Walker also chipped in 12 rebounds and seven assists.

Junior High Boys Basketball
The young Bulldogs traveled to Sabine Pass on Thursday to take on the Sharks. The "A" Team game was a defensive battle during the first half as neither team could get any offense going and the first half ended in a 1-1 tie. The Bulldogs were able to get things going in the second half pulling out the win 13-8. Kameron Lindsey led the Bulldogs with eight points, Isaac Dinger had three points, and Zane Hermsen chipped in two points.

The Bulldogs "B" Team took on the Sharks in the final game of the night. The young Bulldogs fought hard and valiantly, but were unable to come away with a win. They dropped the contest 24-7. The Bulldogs were led by Nate Faircloth with three points, Tanner Rhodes with two and Gavin Stanley with two points to round out the scoring.

Junior High Girls Basketball
The Lady Dogs seventh and eighth grade teams also traveled to Sabine Pass on Thursday to take on the Lady Sharks. The eighth grade team struggled offensively, but played a strong defensive game and came home with a 28-13 win. The Lady Dogs were led by Nature Jackson with 10 points all coming in the second half, also contributing were Jordan Givens with one point, McKayla Marshall with three, Gabby Reynolds with four, Erika Vargas-Martinez with four, and Grace Eddins chipped in six points on the night.

The Lady Dogs seventh grade team also came home with a victory over the Lady Sharks, taking their game 12-4. The Lady Dogs were led by Lainey Spradlin with eight points. Also scoring were Jenna Wolfford and Leah White with two points each.