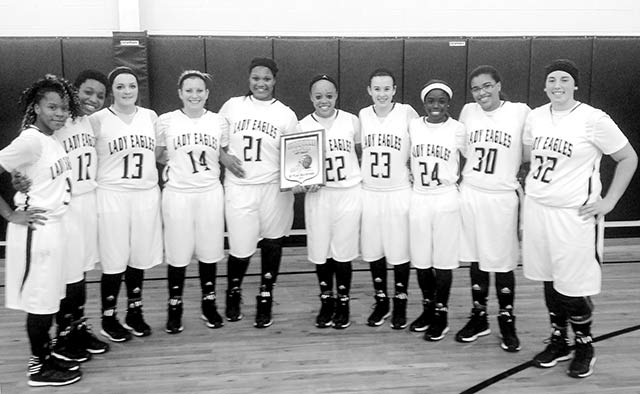 The Woodville Lady Eagles spent their Holiday break preparing for district by playing in the annual Christmas Classic held each in Woodville. The Eagles started pool play Thursday morning against Little Cypress Mauriceville's junior varsity. The Lady Eagles had little trouble in route to a 56-21 victory. The afternoon had Woodville slated against 3A Cleveland. The Lady Eagles jumped out to a 20-4 lead in the first quarter.

The Lady Indians could only manage 20 points the entire game. Woodville took the contest 57-20 advancing to the gold bracket of the tournament.

The gold bracket consisted of Woodville, Groveton, Jasper, Cleveland, Goodrich, Deweyville, Warren, and Palestine. These were the top two teams in each pool. Woodville opened up with Groveton in the first round Friday. Woodville offense started slow but the defense was tough hanging on to a 7-2 lead in the first quarter. Woodville would score 39 points in the next two quarters while holding Lady Indians to just 15. The Lady Eagles coasted to their third blowout of the tournament. The win advanced the Eagles to the semi-finals.

Woodville's win placed them in a rematch with Cleveland. Woodville led 36-12 entering the fourth quarter. The Lady Indians attempted a fourth quarter rally, but it wasn't enough. Woodville won 43-30 going to the finals.

The championship game was played Saturday evening against Palestine.

The Lady Eagles finally met up with some competition as both teams battled back and forth in the first half. Woodville found themselves down 23-21 going to the break. Woodville knotted the game up to 31-31 going to the fourth quarter. Woodville eventually took the game 44-40 for the championship.

Shawnacy Williams was the leading scorer with 11 points on 71% shooting. Bethany Mitchell added 10, while McKenie McGallion and JuLisa Williams scored eight apiece. Six of McGallion's points came via the three point line. Shawnacy also led Woodville with three assists and eight steals, while JuLisa pulled down 11 rebounds. Coach Carrell said after the game, "I am so proud of these girls. We are playing some serious ball now. Let's keep it rolling." Woodville is 15-3 on the season including 4-0 in district.

The boys place fifth in the Christmas Classic. Woodville defeated Hull-Diasetta and Hardin in the tournament. Woodville won its first district game by defeating Hemphill 80-31. The Eagles are now 1-2 in district 20-AA.

The Eagles and Lady Eagles will host Kirbyville Friday before traveling to Corrigan-Camden on Tuesday. The JV's are slated to begin at 5:00 p.m. while the varsity girls and boys are scheduled to begin at 6:00 p.m. and 7:30 p.m. Thursday, Woodville middle school boys will host Corrigan-Camden, while the girls will travel to face the Lady Bulldogs. Tip-off is set for 5:00 p.m.